When the Future Disappears 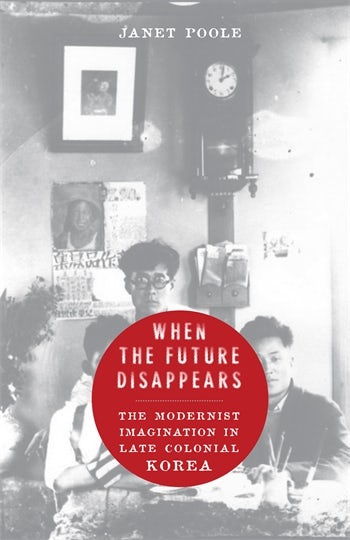 When the Future Disappears

Taking a panoramic view of Korea's dynamic literary production in the final decade of Japanese rule, When the Future Disappears locates the imprint of a new temporal sense in Korean modernism: the impression of time interrupted, with no promise of a future. As colonial subjects of an empire headed toward total war, Korean writers in this global fascist moment produced some of the most sophisticated writings of twentieth-century modernism.

Yi T'aejun, Ch'oe Myongik, Im Hwa, So Insik, Ch'oe Chaeso, Pak T'aewon, Kim Namch'on, and O Changhwan, among other Korean writers, lived through a rare colonial history in which their vernacular language was first inducted into the modern, only to be shut out again through the violence of state power. The colonial suppression of Korean-language publications was an effort to mobilize toward war, and it forced Korean writers to face the loss of their letters and devise new, creative forms of expression. Their remarkable struggle reflects the stark foreclosure at the heart of the modern colonial experience. Straddling cultural, intellectual, and literary history, this book maps the different strategies, including abstraction, irony, paradox, and even silence, that Korean writers used to narrate life within the Japanese empire.

When the Future Disappears is an indispensable addition to the existing studies on Japanese modernism, Japanese imperialism and its politics and culture, European modernism, and the growing body of scholarly works on colonial Korea. Jin-Kyung Lee, University of California, San Diego

In this world-class piece of scholarship and conceptual thinking, Poole shows how Korean poets, philosophers, and essayists in the colonial period struggled in their work with the notion of a disappearing future with no change in sight. Through the local Korean case, she works through the broader question of the complex temporality of the late colonial period and shows how culture bears the imprint of this sense of time in its very form. Alan Tansman, University of California, Berkeley

Poole's brilliantly executed reading of late colonial Korean modernism and fascism exceeds the constraints of mere exceptionality and locality to instantiate colonial Korea's entry into a global modernity that everywhere inflected the encounter with capitalism's production of temporal unevenness through ceaseless efforts to use the past to reinforce a present driven by the pursuit of the new. Poole's decision to see the colonial experience through the prism of the modernist imaginary makes her book a singularly original and valuable contribution to both our understanding of Korea and the wider world of imperial violence. Harry Harootunian, Columbia University

No other English-language academic study of Korean literature more elegantly combines close readings of selected texts with salient readings of their historical and cultural contexts. When the Future Disappears marvelously reanimates aesthetic constellations that emerged at the intersection of colonialism, fascism, and modernism. Jongyon Hwang, Dongguk University

Elegantly written, well-researched... An excellent resource for anyone interested in Korean colonial history and literary studies and/or comparative and Asian literature. CHOICE

This insightful and lucidly written monograph unpacks the contradictions of Korean modernity in the late colonial period. Korea Journal

Janet Poole's fantastic book, When the Future Disappears: The Modernist Imagination in Late Colonial Korea, succeeds in doing what only the best writing can, stirring the heart and hackles of the empirically minded, as well as pushing the reader to access the vestiges of the intriguing group of artists' output that forms the centerpiece of the book. Sino NK

The book's brilliance will without a doubt make it core reading for Koreanists. Keith Howard, Bulletin of the School of Oriental and African Studies

A contemplative and immersive piece of scholarship.... Poole's book is arresting and deeply thought-provoking.... Her inclusion of Korean literature in the Japanese language revisits the perennial question of collaboration, and her ability to discuss these works sheds light in the darkest corners of the canon and begs a consideration of how literary histories of Korean may expand through a consideration of Korea's excised and excluded voices. Dafna Zur, Pacific Affairs

A fresh and invigorating approach to that unruly movement called modernism. Situations 9.2

A brilliant study of the works of six Korean writers produced in both Korean and Japanese during the last decade of colonial rule. Youngju Ryu, Journal of Asian Studies

Janet Poole teaches Korean literature and cultural history at the University of Toronto. She has translated the works of many writers from colonial Korea, including Yi T'aejun's Eastern Sentiments.