Where Are the Women? 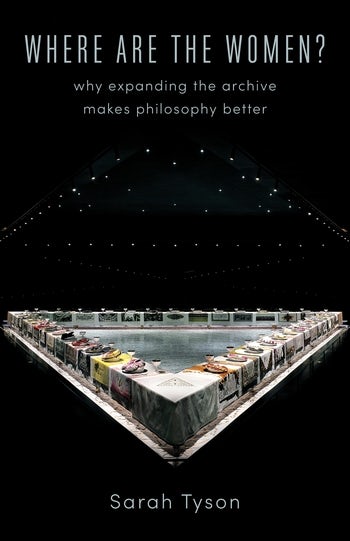 Where Are the Women?

Philosophy has not just excluded women. It has also been shaped by the exclusion of women. As the field grapples with the reality that sexism is a central problem not just for the demographics of the field but also for how philosophy is practiced, many philosophers have begun to rethink the canon. Yet attempts to broaden European and Anglophone philosophy to include more women in the discipline’s history or to acknowledge alternative traditions will not suffice as long as exclusionary norms remain in place.

In Where Are the Women?, Sarah Tyson makes a powerful case for how redressing women’s exclusion can make philosophy better. She argues that engagements with historical thinkers typically afforded little authority can transform the field, outlining strategies based on the work of three influential theorists: Genevieve Lloyd, Luce Irigaray, and Michèle Le Doeuff. Following from the possibilities they open up, at once literary, linguistic, psychological, and political, Tyson reclaims two passionate nineteenth-century texts—the Declaration of Sentiments from the 1848 Seneca Falls Convention and Sojourner Truth’s speech at the 1851 Akron, Ohio, Women’s Convention—showing how the demands for equality, rights, and recognition sought in the early women’s movement still pose quandaries for contemporary philosophy, feminism, and politics. Where Are the Women? challenges us to confront the reality that women’s exclusion from philosophy has been an ongoing project and to become more critical both of how we see existing injustices and of how we address them.

In Where Are the Women?, Sarah Tyson engages with the question of how we can bring historical women philosophers and their work to our philosophical attention, arguing that we need to revise our philosophical methodology and transform philosophical history in order to do so. Her use of Irigaray and Le Doeuff is thought-provoking, and the discussion of Diotima also makes for fascinating reading. Catherine Villanueva Gardner, author of Rediscovering Women Philosophers: Philosophical Genre and the Boundaries of Philosophy

In this bold book, Sarah Tyson revamps the feminist reclamation project to redress not merely exclusion, but all manners of exclusive inclusion. Whether you have never thought of, are inclined not to think of, or are enthusiastic about the thought of Sojourner Truth in the same philosophical frame as Diotima or Socrates, you should read this book. You will learn an entirely new framework for what philosophy could be: rigorous, speculative reflection on how historical texts open up new possibilities for anti-racist and decolonial practice. A philosophical text that completely reimagines the phrase 'reclaiming Truth' is one to be reckoned with. Where Are the Women? is just such a text. David Kazanjian, author of The Brink of Freedom: Improvising Life in the Nineteenth-Century Atlantic World

Drawing on Lloyd, Irigaray, and Le Doeuff, and following the refracted voices of Diotima and Sojourner Truth, this brilliant and provocative book grapples philosophically with the meaning of the exclusion of women from philosophy—and both calls for and performs philosophy’s transformation by reclaiming them. With clarity, insight, urgency, and fierce care, Tyson has given us an exciting and original feminist and anti-racist reclamation of philosophy itself. Sina Kramer, author of Excluded Within: The (Un)Intelligibility of Radical Political Actors

Once you start thinking about how to change a field of knowledge (or anything else) so it no longer justifies excluding, devaluing, exploiting 'kinds' of people as unfit to be equal, you discover that just opening doors cannot and ought not work. Here is a problem so revelatory of deep-rooted injustices that it invites philosophizing anew. Sarah Tyson thinks with others—including Sojourner Truth—on her way to a 'transformative reclamation' not only of women, but of philosophy. Elizabeth Minnich, author of The Evil of Banality: On the Life and Death Importance of Thinking

Acknowledgments
Introduction
1. Reclamation Strategies
2. Conceptual Exclusion
3. Reclamation from Absence
4. Insults and Their Possibilities
5. From Exclusion to Reclamation
6. Injuries and Usurpations
Conclusion
Appendix A: The Declaration of Sentiments and Resolutions
Appendix B: Printed Versions of Sojourner Truth’s Speech at the Women’s Rights Convention in 1851 in Akron, Ohio
Notes
Bibliography
Index

Sarah Tyson is associate professor of philosophy and affiliated faculty of women and gender studies at the University of Colorado Denver. She was coeditor of Philosophy Imprisoned: The Love of Wisdom in the Age of Mass Incarceration (with Joshua M. Hall, 2014).