Who Made Early Christianity?

The Jewish Lives of the Apostle Paul 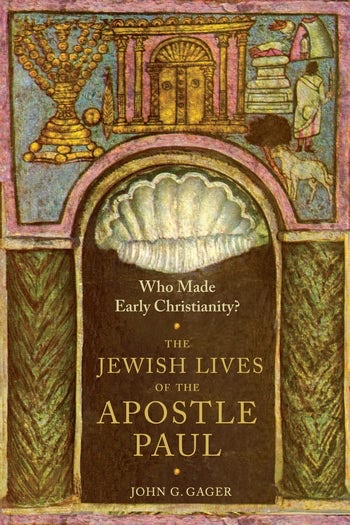 Who Made Early Christianity?

The Jewish Lives of the Apostle Paul

In this historical and theological study, John G. Gager undermines the myth of the Apostle Paul's rejection of Judaism, conversion to Christianity, and founding of Christian anti-Judaism. He finds that the rise of Christianity occurred well after Paul's death and attributes the distortion of the Apostle's views to early and later Christians.

Though Christian clerical elites ascribed a rejection-replacement theology to Paul's legend, Gager shows that the Apostle was considered a loyal Jew by many of his Jesus-believing contemporaries and that later Jewish and Muslim thinkers held the same view. He holds that one of the earliest misinterpretations of Paul was to name him the founder of Christianity, and in recent times numerous Jewish and Christian readers of Paul have moved beyond this understanding.

Gager also finds that Judaism did not fade away after Paul's death but continued to appeal to both Christians and pagans for centuries. Jewish synagogues remained important religious and social institutions throughout the Mediterranean world. Making use of all possible literary and archaeological sources, including Muslim texts, Gager helps recover the long pre-history of a Jewish Paul, obscured by recent, negative portrayals of the Apostle, and recognizes the enduring bond between Jews and Christians that has influenced all aspects of Christianity.

In this delightfully engaging and erudite book, John Gager guides the reader through the interconnected histories of Judaism and Christianity, ranging from the Jewish origins of Christianity to the debates about the apostle Paul in modern Jewish thought. In the process, he succeeds in redefining—yet again—the cutting-edge of research on Jewish/Christian relations. Annette Yoshiko Reed, University of Pennsylvania

A must-read for anyone interested in Christian stereotypes of Jews, who will learn here about the vibrancy and continued appeal of Judaism. This book is a rich source of literary and archeological evidence, as well as illuminating biographical anecdotes, which catch the existential dilemmas of the scholars involved in these burning issues. Maren R. Niehoff, Hebrew University of Jerusalem

In five crisp chapters, John Gager draws here a revisionist picture of Paul the Jew. Doing so, he shows that the figure of Paul as a radical religious innovator, having rejected all aspects of his previous Jewish identity, is seriously flawed. The last generation of scholars has learned to speak of Jesus the Jew. As Gager convincingly argues, it is now time to recognize that Paul, too, remained a committed Jew. Guy Stroumsa, Martin Buber Professor Emeritus of Comparative Religion at the Hebrew University of Jerusalem and Emeritus Professor of the Study of the Abrahamic Religions at the University of Oxford

Who Made Early Christianity? reframes the question in its title and offers a new, revisionist account of the origins of Christianity. John G. Gager reveals the profound Jewishness of early Christianity and reconsiders Paul's role in the formation of Christianity, anti-Judaism in the early Church, and the parting of ways between the two religious faiths. With stunning clarity, his book demonstrates how timely and relevant great scholarship can be to our contemporary world. David Stern, Harry Starr Professor of Classical and Modern Hebrew and Jewish Literature at Harvard University.

After a lifetime of reflection on Paul and his Jewish connections, John Gager gives us, in this extraordinarily lucid and accessible book, a portrait of the Jewish Paul. Within the early Church there were Christians who saw Jews not as enemies but as friends, and Gager argues that this stance derives from Paul. A provocative book, which rescues Paul from the charge of anti-semitism. Shaye J. D. Cohen, Harvard University

For two thousand years, the Church claimed that the Jews were blind, and because of their blindness they did not understand the Old Testament. Now comes John Gager, and argues that it was Christianity that was blind, and because of this blindness, Christians did not understand the New Testament. Paul did not abrogate the Law; he did not convert to Christianity; he was neither the founder of Christianity nor the father of Christian anti-Judaism. Paul was a fateful Jew who wanted to bring salvation to the Gentiles. A revolutionary and fascinating book! Israel Jacob Yuval, Hebrew University of Jerusalem

Among the most influential scholars advocating the reinvention of Paul as a first century Jew, John Gager broadens his perspective in Who Made Christianity? by incorporating a plethora of Jewish interpreters of Paul into the conversation. The result is a passionate, compelling, highly informative narrative that tells us both how the Christian anti-Jewish Paul came into being and exposes us to a shadow tradition that never succumbed to the anti-Jewish portrait of Paul, a tradition that only deepens Gager's own incisive critique of the apostle as traditionally portrayed. Perhaps what will most impress the reader of this book is that the story of Paul and his interpreters as Gager tells it enables an entirely new understanding of the historical relationship between Judaism and Christianity. Even those familiar with the current scholarship on early Christianity will see things differently after they read this book. Pamela Eisenbaum, Iliff School of Theology

This well-written and well-researched book will be an excellent resource for readers with an interest in Paul and ancient Judaism. Library Journal

Gager’s study should . . . be commended for issuing the reminder that ancient Christian attitudes towards Jews and Judaism were not uniformly hostile, that there can be a recognition of difference without an accompanying demonization of the Other. H-Judaic

Gager’s interpretation of the Pauline letters remains influential and controversial, but his excavation here of Jewish perceptions of Paul in late antiquity and the Middle Ages is a genuinely novel contribution, one that must now figure in the lively discussion of the apostle’s place in the intertwining histories of Judaism and Christianity. Theology Today

This book may help some readers understand some of the complexities between two similar, but different, religious traditions. Reading Religion

Acknowledgments
Introduction
1. Was the Apostle to the Gentiles the Father of Christian Anti-Judaism?
2. The Apostle Paul in Jewish Eyes: Heretic or Hero?
3. Let's Meet Downtown in the Synagogue: Four Case Studies
4. Two Stories of How Early Christianity Came to Be
5. Turning the World Upside Down: An Ancient Jewish Life of Jesus
6. Epilogue
Notes
Index

John G. Gager is William H. Danforth Professor of Religion (Emeritus) at Princeton University. His books include Moses in Greco-Roman Paganism; Kingdom and Community: The Social World of Early Christianity; The Origins of Anti-Semitism: Attitudes toward Judaism in Pagan and Christian Antiquity; Curse Tablets and Binding Spells from the Ancient World; and Reinventing Paul.