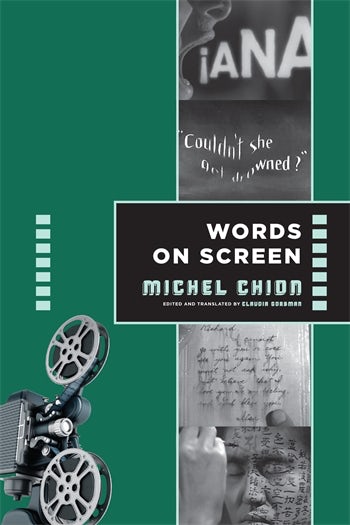 Michel Chion is well known in contemporary film studies for his innovative investigations into aspects of cinema that scholars have traditionally overlooked. Following his work on sound in film in Audio-Vision and Film, a Sound Art, Words on Screen is Chion's survey of everything the seventh art gives us to read on screen. He analyzes titles, credits, and intertitles, but also less obvious forms of writing that appear on screen, from the tear-stained letter in a character's hand to reversed writing seen in mirrors. Through this examination, Chion delves into the multitude of roles that words on screen play: how they can generate narrative, be torn up or consumed but still remain in the viewer's consciousness, take on symbolic dimensions, and bear every possible relation to cinematic space.

With his characteristic originality, Chion performs a poetic inventory of the possibilities of written text in the film image. Taking examples from hundreds of films spanning years and genres, from the silents to the present, he probes the ways that words on screen are used and their implications for film analysis and theory. In the process, he opens up and unearths the specific poetry of visual text in film. Exhaustively researched and illustrated with hundreds of examples, Words on Screen is a stunning demonstration of a creative scholar's ability to achieve a radically new understanding of cinema.

Words On Screen offers a radically new understanding of cinema. By concentrating on the written word in a very wide variety of films, Chion turns what in the past has always been no more than a passing concern into a full-fledged reading strategy, applicable to films of all periods and types. I never could have imagined that Chion would once again create an entirely new approach to cinema. Rick Altman, author of A Theory of Narrative

We tend to take the appearance of written words in movies for granted. In this book, the great film critic Michel Chion compiles an inventory of textual effects, and shows us just how strange, powerful, and surprising words on screen can be. Steven Shaviro, DeRoy Professor of English, Wayne State University

We too often think of the film as a purely visual medium and the text as a purely verbal one. In his highly original and incisive study, Michel Chion illuminates the overt yet overlooked presence of the fusion of visual and verbal that is writing on the screen. The results are revelatory. Chion tracks the whole panoply of inscriptions in film and makes clear how our understanding of film depends on the force of these inscriptions. You will never again look at or read the titles, intertitles, subtitles, signage, or hand-written letters on screen in quite the same way. Ian Balfour, York University

Michel Chion is a composer of musique concrète, a filmmaker, an associate professor at the University of Paris III: Sorbonne Nouvelle, and a prolific writer on film, sound, and music. His previous books with Columbia University Press are The Voice in Cinema; Film, a Sound Art; and Audio-Vision: Sound on Screen.

Claudia Gorbman is emeritus professor of film studies at the University of Washington, Tacoma. She is the author of Unheard Melodies: Narrative Film Music, the editor of several books, and the author of many articles on film sound and film music. She has translated four other books by Michel Chion.