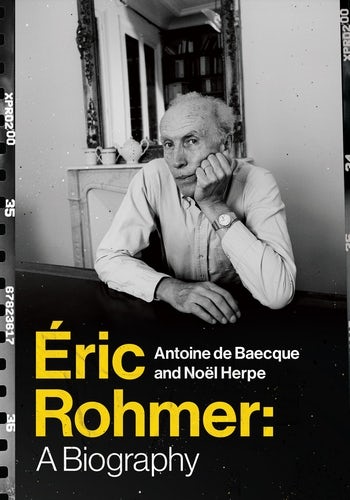 The director of twenty-five films, including My Night at Maud's (1969), which was nominated for a Best Picture Academy Award, and the editor in chief of Cahiers du cinéma from 1957 to 1963, Éric Rohmer set the terms by which people watched, made, and thought about cinema for decades. Such brilliance does not develop in a vacuum, and Rohmer cultivated a fascinating network of friends, colleagues, and industry contacts that kept his outlook sharp and propelled his work forward. Despite his privacy, he cared deeply about politics, religion, culture, and fostering a public appreciation of the medium he loved.

This exhaustive biography uses personal archives and interviews to enrich our knowledge of Rohmer's public achievements and lesser known interests and relations. The filmmaker kept in close communication with his contemporaries and competitors: François Truffaut, Jean-Luc Godard, Claude Chabrol, and Jacques Rivette. He held a paradoxical fascination with royalist politics, the fate of the environment, Catholicism, classical music, and the French nightclub scene, and his films were regularly featured at New York and Los Angeles film festivals. Despite an austere approach to life, Rohmer had a voracious appetite for art, culture, and intellectual debate captured vividly in this definitive volume.

Antoine de Baecque and Noël Herpe achieve in this scrupulously researched volume the paradoxical feat of delivering the definitive biography of a pseudonymous subject. Eric Rohmer will interest film historians, theorists of film, enthusiasts of French cinema, and film directors both aspiring and established, for whom Rohmer's low-budget modus operandi remains one of the miracles of modern film production. This, the first biography of Rohmer (né Maurice Schérer), is likely also to be the last. Derek Schilling, Johns Hopkins University

Rohmer was sensitive, very well educated, and at home with literature, music, painting and theater; the biography shows a happy life lived in such culture. It shows how this flows easily into his films, how they operate as experiments in feeling and perception. The book makes one hungry to see them all over again. Dudley Andrew, Yale University

One of the most distinguished filmmakers of the French new wave.... [de Baecque and Herpe] pull off the high-wire act of appealing to both film scholars and lay readers with a combination of comprehensive research and engaging storytelling. The book will foster a renewed appreciation of a complex artist and the remarkable body of work he left behind. Publishers Weekly (starred review)

An essential and ceaselessly enjoyable work of scholarship.... The most valuable gift afforded by this biography is the sheer joy of moving through the exacting, meticulous accounts of each stage of Rohmer's life and career, painstakingly researched and written as if the authors were striving for the same arresting attention to detail, subtlety, humor, and philosophical weight of his films. Dan Sullivan, Film Comment

Biography of the year for cineasts. Booklist (starred review)

Compulsively readable, this volume is a model of scholarship and style that no serious cinephile's library should be without. Library Journal (starred review)

An intimate, anecdote-filled look at a legend. Allen Pierleoni, The Sacramento Bee

The definitive overview of the director's life. MidCenturyCinema

A thorough study of a great director. Highly recommended. Choice

No doubt [de Baecque and Herpe's] enthralling biography will remain the ultimate text on the life and legacy of Eric Rohmer, just like Rohmer will live on as one of the ultimate figures of cinema. Film International

This book is to be treasured for the huge amount of research undertaken—and tetimonial collected—by the authors. . . . It gives us significant insights into the working methods of a great filmmaker, who in his deceptive simplicity has proved largely intimitable. David Thompson, Sight and Sound

De Baecque and Herpe open the door to Rohmer’s world by treating the reader as an interlocutor to whom they are excitedly relaying delightful nuggets from the life of “le grand Momo”: that time he and an actress ate cookies and listened to Tahitian music in pious silence (p. 343); the other time when the American comedian Chris Rock remade his film Chloe in the Afternoon (p. 257). In other words, reading Éric Rohmer: A Biography feels like having a long conversation--a nourishing and satisfying one. Laure Astourian, Bentley University, H-France Review

Antoine de Baecque is professor of the history of cinema at Paris Nanterre University. He has published biographies of François Truffaut and Jean-Luc Godard and was editor in chief of Cahiers du cinéma.

Noël Herpe is a senior lecturer at the Université de Paris VIII. He has published works on René Clair and Sacha Guitry, as well as a book of interviews with Éric Rohmer about Rohmer’s book, Le Celluloïd et le marbre.