A Brief History of Entrepreneurship

The Pioneers, Profiteers, and Racketeers Who Shaped Our World 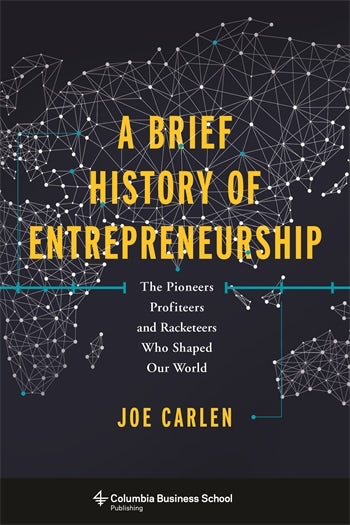 A Brief History of Entrepreneurship

The Pioneers, Profiteers, and Racketeers Who Shaped Our World

A Brief History of Entrepreneurship charts how the pursuit of profit by private individuals has been a prime mover in revolutionizing civilization. Entrepreneurs often butt up against processes, technologies, social conventions, and even laws. So they circumvent, innovate, and violate to obtain what they want. This creative destruction has brought about overland and overseas trade, colonization, and a host of revolutionary technologies—from caffeinated beverages to the personal computer—that have transformed society.

Consulting rich archival sources, including some that have never before been translated, Carlen maps the course of human history through nine episodes when entrepreneurship reshaped our world. Highlighting the most colorful characters of each era, he discusses Mesopotamian merchants' creation of the urban market economy; Phoenician merchant-sailors intercontinental trade, which came to connect Africa, Asia, and Europe; Chinese tea traders' invention of paper money; the colonization of the Americas; and the current "flattening" of the world's economic playing field.

Yet the pursuit of profit hasn't always moved us forward. From slavery to organized crime, Carlen explores how entrepreneurship can sometimes work at the expense of others. He also discusses the new entrepreneurs who, through the nascent space tourism industry, are leading humanity to a multiplanetary future. By exploring all sides of this legacy, Carlen brings much-needed detail to the role of entrepreneurship in revolutionizing civilization.

Joe Carlen delves in primary and secondary sources, including texts on modern management, and presents them in readable and attractive prose. A Brief History of Entrepreneurship is a light and enjoyable read. Ali Kahn, Abram Hutzler Professor of Political Economy, Johns Hopkins University

This enjoyable book is full of great stories and practical ideas that any entrepreneur can use to be more successful faster. Brian Tracy, author of The Way to Wealth

Covering millennia and the whole planet, Carlen provides us with the fascinating story of how those individuals taking risks in the search for profits not only adapted and responded to seemingly unsurmountable challenges but also (and more importantly) shaped the world we live in. Marcelo Bucheli, author of Bananas and Business: The United Fruit Company in Colombia, 1899-2000

A Brief History of Entrepreneurship is an unbelievably enthralling and inspirational book, especially so for enthusiasts, practitioners and students of entrepreneurship and business. Sapphire Ng, Impeccable Business

Entrepreneurs will come to better understand who they are and what they do by reading this book.... Highly recommended. CHOICE

Carlen's enlightening book considers many aspects of the historical development of entrepreneurship and will attract business-minded readers. Library Journal

I believe that continually expanding our understanding of the roots of entrepreneurship and what’s changed are key to being a good business owner. A page turner...thrilling. Barbara Weltman, Big Ideas For Small Business

Introduction
1. "One Shekel of Your Private Silver"
2. The Pirates of Phoenicia
3. The Reluctant Romans
4. An Enterprising Faith
5. Flying Money and Capitalist Monks
6. Western Europe and a "New World" of Profit
7. Captains of the Revolution
8. The Land of (Entrepreneurial) Opportunity
9. Flattening the World and Colonizing Space
Conclusion
Notes
Acknowledgments
Index

Joe Carlen is the cofounder of Know Thy Market, LLC, and a certified valuation analyst. He is the author of The Einstein of Money: The Life and Timeless Financial Wisdom of Benjamin Graham (2012).