Through Dizzy Gates of Illusion 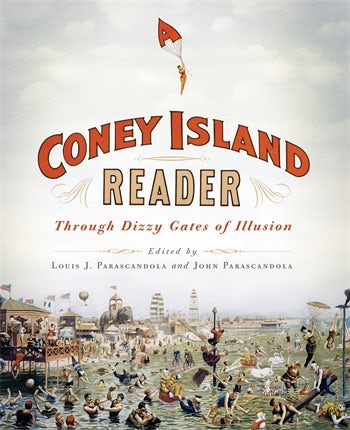 Through Dizzy Gates of Illusion

Moody, mystical, and enchanting, Coney Island has thrilled newcomers and soothed native New Yorkers for decades. With its fantasy entertainments, renowned beach foods, world-class boardwalk, and expansive beach, it provides a welcome respite from the city's dense neighborhoods, unrelenting traffic, and somber grid. Coney Island has long offered a kaleidoscopic panorama of people, places, and events, creating, as Lawrence Ferlinghetti once wrote, "a Coney Island of the mind." This anthology captures the highs and lows of that sensation, with works that imagine Coney Island as a restful resort, a playground for the masses, and a symbol of America's democratic spirit, as well as a Sodom by the sea, a garish display of capitalist excess, and a paradigm of urban decay. As complex as the city of which it is a part, Coney Island engenders limitless perspectives, a composite inspiring everyone who encounters it to sing its electric song.

A Coney Island Reader brings together a vibrant collection of voices that chronicle and critique Coney Island's extraordinary history from its formation to its most recent phase of revitalization, with all the glow and glitter of Luna Park. Michael Immerso, Author, Coney Island: The People's Playground

An amazing Americana anthology of Coney fact-fiction-poetry-tabloid news and government propaganda, many pieces obscure, a few famous yet so hard to find all bound together in what now becomes the definitive and best beach book read about the Island that invented beach leisure. Dick Zigun, Artistic Director, Coney Island USA

The ever-contradictory nature of Coney Island is brought to light in this collection of literature from some of the nineteenth and twentieth centuries' most prominent writers. Publishers Weekly

A Coney Island Reader is a wonderful collection of fiction and nonfiction, poetry and journalism, memoirs and official government reports accompanied by evocative photographs and illustrations. The cover alone captures the essence of the place: fun, chaotic, unpredictable. June Sawyers, Chicago Tribune

Coney Island might seem an unlikely muse, but in a city that has always been home to writers of all stripes, the seaside enclave has consistently driven pen to paper, fingertips to keyboard. Annaliese Griffin, Brooklyn Based

A comprehensive anthology of writings on a unique place in Brooklyn.... A must-read compilation for anyone who has ever visited Coney Island at least once if not many times and has fond (or perhaps not-so-fond) memories of this important landmark attraction. Library Journal

If one is interested in the history of Coney Island, A Coney Island Reader is a must. Raanan Geberer, Brooklyn Daily Eagle

From Nathan's Hotdogs and the Wonder Wheel to end-of-season gloom and recession, Coney sings the bright and dim electric song of Brooklyn's iconic peninsula. This literary anthology unfolds the layers of the unique destination while enhancing the experience with historical photos. World Literature Today

Louis J. Parascandola is professor of English at Long Island University. He is the editor of "Look for Me All Around You": Anglophone Caribbean Immigrants in the Harlem Renaissance and coeditor of In Search of Asylum: The Later Writings of Eric Walrond.

John Parascandola taught at the University of Wisconsin–Madison before serving as chief of the History of Medicine Division of the National Library of Medicine and as Public Health Service Historian. He is the author of The Development of American Pharmacology: John J. Abel and the Shaping of a Discipline and Sex, Sin, and Science: A History of Syphilis in America.