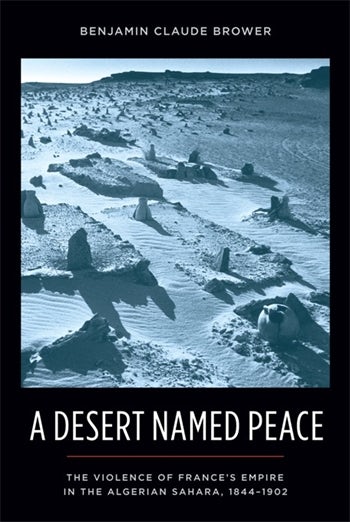 In the mid-nineteenth century, French colonial leaders in Algeria started southward into the Sahara, beginning a fifty-year period of violence. Lying in the shadow of the colonization of northern Algeria, which claimed the lives of over a million people, French empire in the Sahara sought power through physical force as it had elsewhere; yet violence in the Algerian Sahara followed a more complicated logic than the old argument that it was simply a way to get empire on the cheap.

A Desert Named Peace examines colonial violence through multiple stories and across several fields of research. It presents four cases: the military conquests of the French army in the oases and officers' predisposition to use extreme violence in colonial conflicts; a spontaneous nighttime attack made by Algerian pastoralists on a French village, as notable for its brutality as for its obscure causes; the violence of indigenous forms of slavery and the colonial accommodations that preserved it during the era of abolition; and the struggles of French Romantics whose debates about art and politics arrived from Paris with disastrous consequences.

Benjamin Claude Brower uses these different perspectives to reveal the unexpected causes of colonial violence, such as France's troubled revolutionary past and its influence on the military's institutional culture, the aesthetics of the sublime and its impact on colonial thinking, the ecological crises suffered by Saharan pastoralists under colonial rule, and the conflicting paths to authority inherent in Algerian Sufism. Directly engaging a controversial history, A Desert Named Peace offers an important backdrop to understanding the Algerian war for independence (1954-1962) and Algeria's ongoing internal war, begun in 1992, between the government and armed groups that claim to fight for an Islamist revolution.

A Desert Named Peace is a very impressive book. Clearly and, at times, very beautifully written, the volume brings together a staggering amount of archival and primary evidence and equally draws effectively on a mountain of secondary studies. On the subject of French involvement in Algeria, Benjamin Claude Brower comes across as exceptionally learned-a term not used too much any more, but which perhaps describes Brower best. This is sure to be a subject of interest to a wide variety of scholars. J. P. Daughton, Stanford University, and author of An Empire Divided: Religion, Republicanism, and the Making of French Colonialism, 1880-1914

In this rich and troubling story of the French conquest of Algeria, Benjamin Claude Brower takes up the question of violence, its sources, and its history. As the French pursued a project of 'pacification' in the name of civilization, they at once practiced and provoked horrific violence. Brower delves deeply into the many justifications developed for this violence. His remarkable book moves quite literally from the banalities of economic, political, and military reasoning to Romantic idealizations of the sublime (embodied especially by the Sahara desert). He offers no single causal explanation for the violence that occurred on both sides of the colonial relationship, but we leave the book with a deeper understanding of how and why it came about. Joan W. Scott, author of The Politics of the Veil

The conquest of the Sahara offered French enterprise no potential for profit, but it fascinated the French military and a romantic band of explorers. The story of the conquest is one of violence and brutality masked by extravagant delusion. Benjamin Claude Brower tells this story well. Brower's discussion of French policy toward slavery and the slave trade is particularly valuable. It is a tale of laws proclaimed but rarely enforced, and of compromises that left few tracks, for Saharan administrators did not wish to compromise themselves. Brower uncovers those tracks with a detective's skill. Martin Klein, professor emeritus, University of Toronto

A very engaging and rich study of the French conquest of the Algerian Sahara Amal Ghazal, H-Levant

This ambitious book makes a major contribution to the study of empire. Clifford Rosenberg, H-France

A well written revisionist look at the dark side of colonialism. A.A. Nofi, StrategyPage

Benjamin Claude Brower is an assistant professor of history at the University of Texas at Austin and a former member of the Institute for Advanced Study, Princeton, New Jersey.