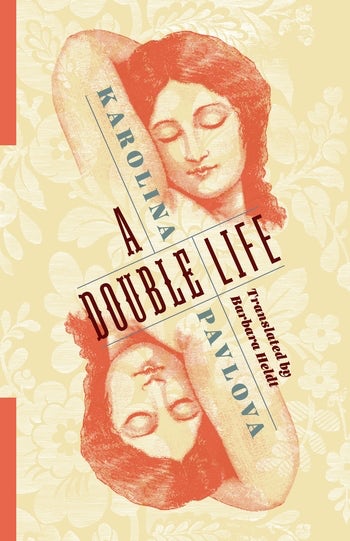 An unsung classic of nineteenth-century Russian literature, Karolina Pavlova’s A Double Life alternates prose and poetry to offer a wry picture of Russian aristocratic society and vivid dreams of escaping its strictures. Pavlova combines rich narrative prose that details balls, tea parties, and horseback rides with poetic interludes that depict her protagonist’s inner world—and biting irony that pervades a seemingly romantic description of a young woman who has everything.

A Double Life tells the story of Cecily, who is being trapped into marriage by her well-meaning mother; her best friend, Olga; and Olga’s mother, who means to clear the way for a wealthier suitor for her own daughter by marrying off Cecily first. Cecily’s privileged upbringing makes her oblivious to the havoc that is being wreaked around her. Only in the seclusion of her bedroom is her imagination freed: each day of deception is followed by a night of dreams described in soaring verse. Pavlova subtly speaks against the limitations placed on women and especially women writers, which translator Barbara Heldt highlights in a critical introduction. Among the greatest works of literature by a Russian woman writer, A Double Life is worthy of a central place in the Russian canon.

Karolina Pavlova’s 1848 novel made a splash when it first appeared, and for good reason. It is interesting in form, mixing prose and poetry, and full of sharply ironic insights about Russian society of the day, especially the lives of young women. This beautiful new edition of Barbara Heldt's translation offers the chance to appreciate a work of nineteenth-century Russian literature that deserves attention, the writing of a remarkable poet and author. Sibelan Forrester, Swarthmore College

Pavlova’s A Double Life is a landmark of nineteenth-century Russian literature. With its multilayered account of a young society woman’s mysterious transformation into a poet, the novella explores a host of social, spiritual, and aesthetic questions. Indispensable, particularly in this revised edition of Barbara Heldt's translation. Thomas Hodge, Wellesley College

Published in the revolutionary year of 1848, A Double Life traces the awakening of a young noblewoman who by day submits to the prose of high society matchmaking, while at night she is a poet in her dreams of true love. Before Kate Chopin and Virginia Woolf, there was Karolina Pavlova. Hilde Hoogenboom, Arizona State University

Once banished from the literary canon, this new release of her only novel includes both her prose and poetry that offer astute observations of Russian society. Christian Science Monitor

A Double Life is an appealing novel, offering a colorful, penetrating portrait of Moscow's high society in those times, especially the lives of the wives and women in it. M. A. Orthofer, The Complete Review

A Double Life has plenty to say about how the marriage market deprived young noblewomen of outward agency and constrained their inner lives. . . . Heldt’s translation beautifully conveys the prose narrator’s astringent tone as well as the emotional intensity of the dreamworld’s poetry. Katharine Hodgson, Times Literary Supplement

Pavlova’s novel A Double Life shook the Russian literary world when it was published in 1848, earning widespread praise for its revolutionary form and psychological acuity. . . . The slim mixed-genre novel—translated by Barbara Heldt and released this year in a new edition . . . follows the 18-year-old Cecily von Lindenborn as her mother attempts to find her a husband. . . . The book is remarkable for its insights about the workings of internalized oppression. Talya Zax, The Atlantic

After all the thick tomes by Fyodors and Leos and Ivans, here we have a slim tale authored by a woman, and that alone should alert us that our old expectations may need to be altered. Los Angeles Review of Books

Karolina Pavlova, born Karolina Jaenisch in 1807, was a Russian poet and translator and presided over a famous Moscow literary salon. She died in Dresden in 1893, having abandoned Russia not because of tsarist oppression but because of hostile criticism of her poetry and her personal life. A Double Life is her major work.

Barbara Heldt is professor emerita of Russian at the University of British Columbia. Her books include Koz’ma Prutkov: The Art of Parody (1973) and Terrible Perfection: Women and Russian Literature (1987).