A Farewell to Truth 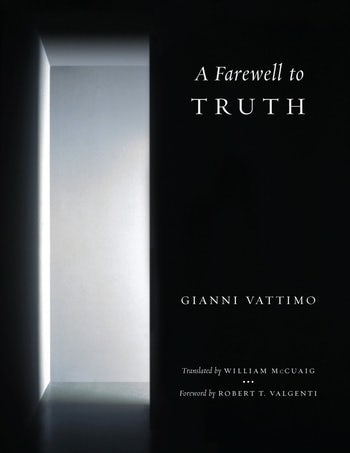 A Farewell to Truth

With Western cultures becoming more pluralistic, the question of "truth" in politics has become a game of interpretations. Today, we face the demise of the very idea of truth as an objective description of facts, though many have yet to acknowledge that this is changing.

Gianni Vattimo explicitly engages with the important consequences for democracy of our changing conception of politics and truth, such as a growing reluctance to ground politics in science, economics, and technology. Yet in Vattimo's conception, a farewell to truth can benefit democracy, exposing the unspoken issues that underlie all objective claims. The end of absolute truth challenges the legitimacy of policies based on perceived objective necessitiesprotecting the free market, for example, even if it devastates certain groups or classes. Vattimo calls for a truth that is constructed with consensus and a respect for the liberty of all. By taking into account the cultural paradigms of others, a more "truthful" societyfreer and more democraticbecomes possible.

In this book, Vattimo continues his reinterpretation of Christianity as a religion of charity and hope, freeing society from authoritarian, metaphysical dogmatism. He also extends Nietzsche's "death of God" to the death of an authoritarian God, ushering in a new, postreligious Christianity. He connects the thought of Martin Heidegger, Karl Marx, and Karl Popper with surprising results and accommodates modern science more than in his previous work, reconciling its validity with an insistence that knowledge is interpretive. Vattimo's philosophy justifies Western nihilism in its capacity to dispense with absolute truths. Ranging over politics, ethics, religion, and the history of philosophy, his reflections contribute deeply to a modern reconception of God, metaphysics, and the purpose of reality.

Gianni Vattimo has long had his finger squarely on the pulse of a world weary of strong, aggressive claims to truth, precisely for fear that such assertions too often result in belligerent intolerance and even in spiritual and physical violence. In A Farewell to Truth, he continues to offer thoughtful and provocative challenges to all those who hold for a naively objective notion of truth. Vattimo's signature 'weak thought' offers readers a theoretical basis for tolerance and pluralism without sacrificing truth claims entirely. Everyone will find in this highly readable volume a stimulating incitement to further thought and animated debate. Thomas G. Guarino, Seton Hall University

When a major thinker takes pains to bid farewell to a defining project of humanity, as Immanuel Kant did with metaphysics, Karl Marx did with religion, Martin Heidegger did with philosophy, and Gianni Vattimo has done with truth, it is usually not to get rid of it but to reopen it and realize its promise. This is the truth of this provocative book. Jean Grondin, Université de Montreal, author of Introduction to Metaphysics: From Parmenides to Levinas

Clearly written, rigorously yet passionately argued, A Farewell to Truth is Gianni Vattimo's exciting philosophical manifesto for a credible political liberation, recognizing how, when faced with postmodern pluralism, the truth can only and necessarily appear as a matter of consensus over collective interpretations and shared paradigms. In this sense, Vattimo's claim that a farewell to (absolute and objectivistic) truths is 'the commencement and the very basis of democracy' is not only highly plausible but extraordinarily inspiring for those who have not lost hope that philosophy may (still and always) contribute politically and ethically to the fate of our contemporary globalized world. Silvia Benso, Rochester Insitute of Technology

Foreword, by Robert T. Valgenti
Introduction
1. Beyond the Myth of Objective Truth
2. The Future of Religion
3. The End of Philosophy
Notes
Bibliography

Gianni Vattimo is emeritus professor of philosophy at the University of Turin and a member of the European Parliament. His books with Columbia University Press include The Responsibility of the Philosopher; Christianity, Truth, and Weakening Faith: A Dialogue; Not Being God: A Collaborative Autobiography; Art's Claim to Truth; After the Death of God (with John D. Caputo); Dialogue with Nietzsche; The Future of Religion (with Richard Rorty); Nihilism and Emancipation: Ethics, Politics, and Law; and After Christianity.

William McCuaig is the translator of many books by Gianni Vattimo, including The Responsibility of the Philosopher; Christianity, Truth, and Weakening Faith: A Dialogue; Not Being God: A Collaborative Autobiography; and Dialogue with Nietzsche.