A Genealogy of Devotion 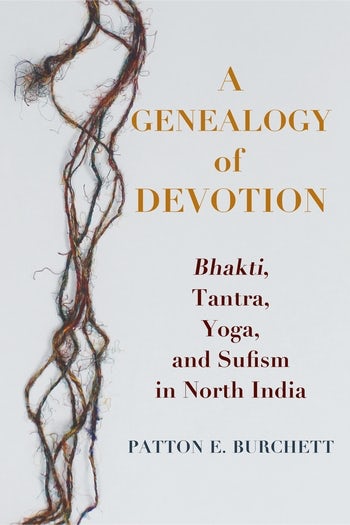 A Genealogy of Devotion

In this book, Patton E. Burchett offers a path-breaking genealogical study of devotional (bhakti) Hinduism that traces its understudied historical relationships with tantra, yoga, and Sufism. Beginning in India’s early medieval “Tantric Age” and reaching to the present day, Burchett focuses his analysis on the crucial shifts of the early modern period, when the rise of bhakti communities in North India transformed the religious landscape in ways that would profoundly affect the shape of modern-day Hinduism.

A Genealogy of Devotion illuminates the complex historical factors at play in the growth of bhakti in Sultanate and Mughal India through its pivotal interactions with Indic and Persianate traditions of asceticism, monasticism, politics, and literature. Shedding new light on the importance of Persian culture and popular Sufism in the history of devotional Hinduism, Burchett’s work explores the cultural encounters that reshaped early modern North Indian communities. Focusing on the Rāmānandī bhakti community and the tantric Nāth yogīs, Burchett describes the emergence of a new and Sufi-inflected devotional sensibility—an ethical, emotional, and aesthetic disposition—that was often critical of tantric and yogic religiosity. Early modern North Indian devotional critiques of tantric religiosity, he shows, prefigured colonial-era Orientalist depictions of bhakti as “religion” and tantra as “magic.” Providing a broad historical view of bhakti, tantra, and yoga while simultaneously challenging dominant scholarly conceptions of them, A Genealogy of Devotion offers a bold new narrative of the history of religion in India.

Vibrant, lyrical, and elegantly crafted, A Genealogy of Devotion is a scholarly opera on the history of bhakti (devotion) in India. Burchett fundamentally changes the way we think about bhakti, leaving readers with a book that is truly inspired. Christian Lee Novetzke, author of The Quotidian Revolution: Vernacularization, Religion, and the Premodern Public Sphere in India

So wide-ranging in importance and so carefully and broadly researched, this is a book people will turn to for many, many years to come—both for its own special contribution and for a basic orientation to the field. John Stratton Hawley, author of A Storm of Songs: India and the Idea of the Bhakti Movement

Kudos to Patton E. Burchett for this rich, fine-grained historical analysis of the multifaceted relationships between the human agents of bhakti, tantra, yoga, and Sufism in Sultanate and Mughal India. Religious nationalists and other simpletons will find little comfort here. David Gordon White, author of The Yoga Sutra of Patañjali: A Biography

Burchett's provocative study adeptly traces the transformation of popular religion in early modern North India from an age dominated by Śaiva, tantric, and yogic traditions to one permeated by Vaiṣṇava bhakti piety. His well-argued thesis is that a crucial element in this shift was the interaction with and influence of Persianate and Sufi religiosity and cultural practices. Philip Lutgendorf, author of Hanuman’s Tale: The Messages of a Divine Monkey and translator of The Epic of Ram

By situating Vaiṣṇava bhakti traditions within larger religious and political contexts, this ambitious and innovative work offers a refreshingly broad perspective on North Indian culture, along with a better appreciation of bhakti's message and appeal in the early modern era. Changing trends in religious patronage, the impact of Sufism, the varieties of religious practice, how bhakti poets disparaged tantra and yoga—these are among the fascinating historical issues explored in Burchett's path-breaking study. Cynthia Talbot, author of The Last Hindu Emperor: Prithviraj Chauhan and the Indian Past, 1200-2000

Acknowledgments
Notes on Transliteration and Translation
Introduction: Tantra, Yoga, and Sufism in the Historiography of Bhakti
Part I: From Medieval Tantra to Early Modern Bhakti
1. The Tantric Age: Tantra and Bhakti in Medieval India
2. Sultans, Saints, and Songs: Persianate Culture, Sufism, and Bhakti in Sultanate India
3. Akbar’s New World: Mughals and Rajputs in the Rise of Vaiṣṇava Bhakti
Part II: Yogīs , Poets, and a New Bhakti Sensibility in Mughal India
4. Between Bhakti and Śakti: Religious Sensibilities Among the Rāmānandīs of Galta
5. Nāth Yogīs and Rāmānandī Bhaktas: Styles of Yoga and Asceticism in North India
6. Agradās and the Circulation of Mughal Bhakti: Formations of Bhakti Community
Part III: The Devotee Versus the Tāntrika
7. Yogīs and Tantra-Mantra in the Poetry of the Bhakti Saints
8. The Triumphs of Devotion: The Sufi Inflection of Early Modern Bhakti
Conclusion: Bhakti Religion and Tantric Magic
Appendix: List of Manuscripts Containing Compositions by Agradās
Notes
Bibliography
Index

Patton E. Burchett is assistant professor of religious studies at the College of William and Mary.