A History of the Iraq Crisis 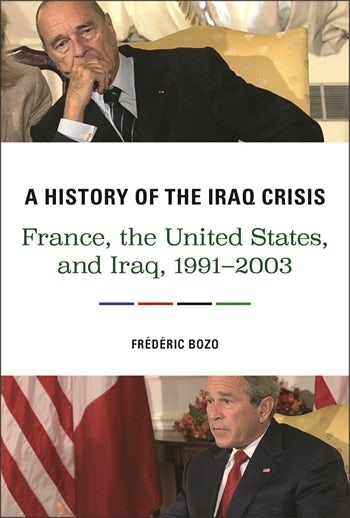 A History of the Iraq Crisis

In March 2003, the United States and Great Britain invaded Iraq to put an end to the regime of Saddam Hussein. The war was launched without a United Nations mandate and was based on the erroneous claim that Iraq had retained weapons of mass destruction. France, under President Jacques Chirac and Foreign Minister Dominique de Villepin, spectacularly opposed the United States and British invasion, leading a global coalition against the war that also included Germany and Russia. The diplomatic crisis leading up to the war shook both French and American perceptions of each other and revealed cracks in the transatlantic relationship that had been building since the end of the Cold War.

Based on exclusive French archival sources and numerous interviews with former officials in both France and the United States, A History of the Iraq Crisis retraces the international exchange that culminated in the 2003 Iraq conflict. It shows how and why the Iraq crisis led to a confrontation between two longtime allies unprecedented since the time of Charles de Gaulle, and it exposes the deep and ongoing divisions within Europe, the Atlantic alliance, and the international community as a whole. The Franco-American narrative offers a unique prism through which the American road to war can be better understood.

This book, the only serious study in any language of Franco-American relations during the 2002–3 Iraq crisis, is based on the most complete range of sources available on both sides of the Atlantic. It challenges a number of the stereotypes and elements of received wisdom about the crisis and situates the policies of the George W. Bush administration in their true historical context. Jolyon Howorth, Yale University, author of Security and Defence Policy in the European Union

This book should be required reading for every serious observer of the Syria crisis. It is not about Syria, but about another country with a dictator who dominated international diplomacy for years and was the target of two western military interventions, one successful, the other disastrous: Saddam Hussein's Iraq. Sylvie Kauffmann, Le Monde

This is an exquisitely written treatment of the decisions leading to the Iraq tragedy. Bozo shines light on events that can only come from the outside. France saw things America did not—in Baghdad and Washington. American readers will learn how we are seen from outside and witness the often unexpected reactions to decisions made in Washington. A vital history for both academics and practitioners in international security. Charles A. Duelfer, former deputy chairman of the UN Iraq weapons inspectors (UNSCOM) and head of the Iraq Survey Group

The main value of this excellent book, however, lies in the historical depth it gives to the 2003 crisis. It provides a detailed account of the policies of the coalition members towards Iraq from 1991 onwards, and of the divisions between them. Survival

A valuable addition to the burgeoning literature on the subject—and one, moreover, whose judgements are notably measured, especially on some of the most emotive aspects of the whole affair. Foreign Affairs

This is a brilliant piece of history. It is also a very important book. The stand-off between the U.S. and France over the 2002-2003 Iraq crisis was the most dramatic incident since Suez in relations between these two ‘oldest allies.’ It was also...by far the most consequential confrontation. H-Diplo Roundtable

Should become a staple in ongoing American debates over why Washington's decisions after September 11 triggered a series of wars and terror that haunt the world more than a decade later. Journal of American History

This is a valuable addition to the historical literature on the Iraq War, which also improves our understanding
of intra-alliance bargaining and coalition building at the UN Security Council. Political Science Quarterly

A valuable addition to the burgeoning literature on the subject - and one, moreover, whose judgements are notably measured. International Affairs

Acknowledgments
List of Abbreviations
Introduction
Prologue: Faced with a Hyperpower
1. From One War to Another: 1991–2001
2. Bush 43 and September 11: January–December 2001
3. The Axis of Evil: January–September 2002
4. The Negotiations: September–December 2002
5. The Rupture: January 2003
6. The Confrontation: February 2003
7. The War: Spring–Summer 2003
Epilogue: Reconciliation: 2003–2007
Afterword
Abbreviations in Notes
Notes
Sources and Bibliography
Index

Frédéric Bozo is professor in the Department of European Studies at the Sorbonne Nouvelle (University of Paris III). He is the author of Mitterrand, the End of the Cold War, and German Unification (2009), among other works, and was a public policy scholar at the Wilson Center in 2010–11.