A History of Virility 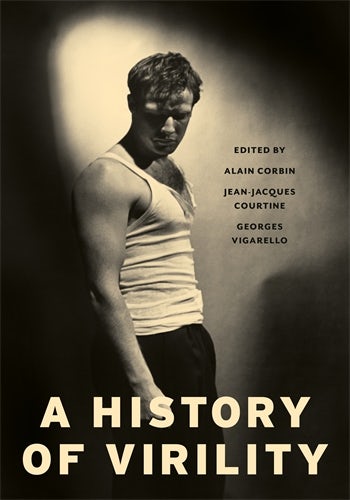 A History of Virility

How has the meaning of manhood changed over time? A History of Virility proposes a series of answers to this question by describing a trajectory that begins with ancient conceptions of male domination and privilege and examining how it persisted, with significant alterations, for centuries. While the mainstream of virility was challenged during the Enlightenment, its preeminence was restored by social forms of male bonding in the nineteenth century. Pacifist, feminist, and gay rights movements chipped away at models and codes of virility during the next hundred years, leading to the twentieth century's disclosing of a "virility on edge," or virility as an unstable entity dispossessed of any automatic claim to power.

These original essays, written by an international group of scholars including Arlette Farge, Jean-Paul Bertaud, Christelle Taraud, and Fabrice Virgili, add an intriguing sociohistorical dimension to our understanding of the evolution of virility. Unsettling received notions of political and cultural critique, these authors consider painting, sculpture, literature, film, and philosophy to expand our knowledge of fascism, nationalism, liberalism, classicism, and colonialism.

An innovative contribution to the cultural history of gender, with literature as a central element, A History of Virility provides a complete and coherent sense of the trajectory of French notions of virility from and across all periods. Readers interested in masculinity or gender more broadly will read with great interest. Todd W. Reeser, University of Pittsburgh

A sweeping history of masculinity in the tradition of Ariès and Duby's A History of Private Life that complements and enriches English-language perspectives on gender and sexuality. Lewis Seifert, Brown University

The essays seek to explain how the noble aspirations of being male have been constructed and changed over time. As the essays build heavily on developments in the arts and literature, they reflect development in the politics of everyday life as well as major movements, including fascism, nationalism, and colonialism. . . . Highly recommended. Choice

A History of Virility is an entrancing, informative, and radical book . . . It is a tremendous intellectual gift. Joanna Burke, Birkbeck, University of London, Journal of Modern History

Translator's Note
Preface
1. Greek Virilities, by Maurice Sartre
2. Roman Virilities: Vir, Virilitas, Virtus, by Jean-Paul Thuillier
3. Barbarian and Knight
The Barbarian World: Hybridity and Transformation of Virility, by Bruno Dumézil
The Medieval: Strength and Blood, by Claude Thomasset
4. Absolute Virility in the Early Modern World
Modern Virility: Convictions and Questionings, by Georges Vigarello
Virility and Its "Others": The Representation of Paradoxical Masculinity, by Lawrence D. Kritzman
Examples from Painting, by Nadeije Laneyrie-Dagen
5. The Virile Man and the Savage in the Lands of Exploration, by Georges Vigarello
6. Uneasy Virility in the Age of Enlightenment
Common Folks' Virility, by Arlette Farge
Men of Fiction, by Michel Delon
7. The Code of Virility: Inculcation
The Triumph of Virility in the Nineteenth Century, by Alain Corbin
Childhood, or the "Journey Toward Virility," by Ivan Jablonka
8. The Duel and the Defense of Virile Honor, by François Guillet
9. The Necessary Manifestation of Sexual Energy, by Alain Corbin
10. Military Virility, by Jean-Paul Bertaud
11. Virility in the Colonial Context, from the Late Eighteenth to the Twentieth Century, by Christelle Taraud
12. The Burden of Virility
The Injunction of Virility, Source of Anguish and Anxiety, by Alain Corbin
Homosexuality and Virility, by Régis Revenin
13. The Great War and the History of Virility, by Stéphane Andoin Rouzeau
14. Origins and Transformations of Male Domination
Impossible Virility, by Jean-Jacques Courtine
Anthropology of Virility: The Fear of Powerlessness, by Claudine Haroche
15. Virilities on Edge, Violent Virilities, by Fabrice Virgili
16. Virility Through the Looking Glass of Women, by Christine Bard
17. "One Is Not Born Virile, One Becomes So," by Arnaud Baubérot
18. Fascist Virility, by Johann Chapoutot
19. Working-Class Virility, by Thierry Pillon
20. Homosexual Transformations, by Florence Tamagne
21. Exhibitions: Virility Stripped Bare, by Bruno Nassim Aboudar
22. Brawn in Civilization: Virile Myth and Muscular Power, by Jean-Jacques Courtine
Notes
Index

Alain Corbin is a French historian and specialist of nineteenth-century France. His publications include Women for Hire: Prostitution and Sexuality in France after 1850; The Foul and the Fragrant: Odor and the French Social Imagination; Village Bells; and The Life of an Unknown.

Jean-Jacques Courtine is professor of European studies at the University of Auckland, and professor emeritus at the Sorbonne nouvelle (Paris III) and the University of California, Santa Barbara. With Alain Corbin and Georges Vigarello, he edited Histoire du corps (History of the Body). His publications include Histoire du visage (History of the Face) and Déchiffrer le corps. Penser avec Foucault (Deciphering the Body. Thinking with Foucault).

Georges Vigarello is one of Europe's best-known historians of the body. He has published prolifically on topics ranging from Concepts of Cleanliness and the cultural history of sports to The History of Rape and The History of the Body. He is research director at the École des hautes etudes en sciences sociales (EHESS), and the author, most recently, of The Metamorphoses of Fat: A History of Obesity.

Keith Cohen has published a number of translations from the French, most notably "The Laugh of the Medusa" by Hélène Cixous, reprinted widely throughout the English-speaking world, as well as Cixous's Third Body.