A Light in Dark Times

The New School for Social Research and Its University in Exile 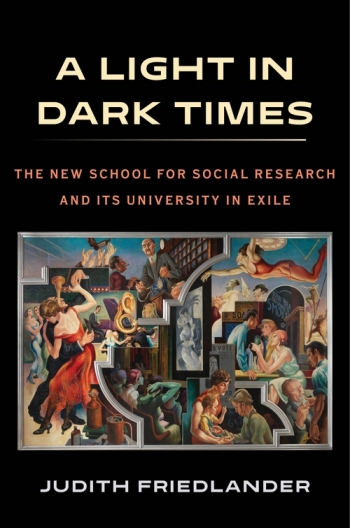 A Light in Dark Times

The New School for Social Research and Its University in Exile

Founded in 1919 in the name of academic freedom, the New School for Social Research quickly became a pioneer in adult education—what its first president, Alvin Johnson, called “the continuing education of the educated." During the 1920s, the New School became the place to go to hear famous people lecture on politics, the arts, and recent developments in new fields of inquiry such as anthropology and psychoanalysis. In 1933 Johnson opened the University in Exile within the New School, providing visas and jobs for nearly two hundred refugees fleeing Hitler. And through these exiled scholars, he re-created in miniature the great intellectual traditions of Europe's imperiled universities.

In this book, Judith Friedlander reconstructs the history of the New School in the context of ongoing debates over academic freedom, intellectual dissidents, and democratic education. Against the backdrop of World War I and the first Red Scare, the Hitler years and McCarthyism, the student uprisings during the Vietnam War and the downfall of communism in Eastern Europe, Friedlander tells a dramatic story of academic, political, and financial struggle through brief sketches of New School administrators, faculty members, trustees, and students, among them Alvin Johnson and the political philosopher Hannah Arendt. As this unique educational institution prepares to celebrate its one hundredth anniversary, A Light in Dark Times offers a timely reflection on the New School's legacy, which can serve as an inspiration for the academic community today.

In this fascinating and compellingly readable narrative, Judith Friedlander tells the multilayered story of an institution founded in moral passion and dedicated to the nurture of intellectual life in its most humane and democratic forms. Full of vivid personalities and international drama, A Light in Dark Times is an engrossing history of an exceptional university, an inspiring account of free thought rescued from the twentieth century’s most repressive regimes—and a book that speaks eloquently to our own turbulent times. Eva Hoffman, author of Exit Into History: A Journey Through the New Eastern Europe and Appassionata

Friedlander's book expertly reveals how the New School emerged and gracefully interlaces the institutional story with the lives of the individuals who fostered the school’s development. The work raises questions about the defense of academic freedom; the complexities of rescuing refugees from political and religious persecution; and the tensions of an institution that, on the one hand, adhered to principles of free intellectual exchanges and, on the other, relied on its faculty to recruit colleagues who promoted discordant issues and methods. Alice Kessler-Harris, R. Gordon Hoxie Professor Emerita of American History, Columbia University

Judith Friedlander’s A Light in Dark Times is a major, well-researched work which explores the emergence, evolution, and contribution of the New School as a catalyst of ideas. The book highlights the university’s role in educating generations of students, as well as serving as a home for noted scholars and intellectuals. Friedlander’s work does justice to the New School’s legacy and reminds us that throughout history ideas and ideals matter and that democracy and excellence are not mutually exclusive. This is a must-read. Vartan Gregorian, president, Carnegie Corporation of New York

The New School bloomed over the course of the twentieth century into a resonant, influential cultural institution for both the city and the country, gathering for its faculty distinguished scholars, writers, and artists from all over the world. Judith Friedlander has written a compelling account of its origins, its struggles, its triumphs, and particularly the vital role it played in attracting German émigré professors seeking to escape the Nazis. A rich and textured history. Michael Rosenthal, author of Nicholas Miraculous: The Amazing Career of the Redoubtable Dr. Nicholas Murray Butler

Judith Friedlander’s history of the New School is at once deeply researched and a delight to read. She traces the New School’s growth and captures the intellectual, scholarly, and political motivations of the individuals who shaped it: the founders, John Dewey and Charles Beard, who saw higher education as linked to public life; its longtime president Alvin Johnson, who rescued scholars from Europe in the Nazi era; and Jonathan Fanton, who brought Eastern European scholars to the New School as communism collapsed. The book is also a story of institutional integrity and the advancement of scholarship and democracy. Her book, remarkable in its range and the liveliness of its prose, offers an outstanding history of a special institution. Thomas Bender, University Professor of the Humanities at New York University (emeritus)

The many founders of the New School were true public intellectuals, journalists, academics and philanthropists. Friedlander’s record of their lives and work emerges as a light in these dark times, offering us a portrait of how an institution takes shape, a vision for thinking about how universities can fail and some ideas about how they might be renewed amid the chaos of our current moment. This work will surely be of interest to anyone who is committed to academic freedom and democratic education. Samantha Hill, Times Higher Education

Formidable in its endeavor and broad in its scope and marches with purpose. International Journal of Politics, Culture, and Society

[Friedlander] recounts the whole saga with well-chosen excerpts....punctuated by occasional anecdotes that convey the human side of some of the characters in this remarkable tale. Academe

Judith Friedlander served from 1993 to 2000 as dean of the Graduate Faculty of Political and Social Science at the New School for Social Research, where she held the Walter A. Eberstadt Chair of Anthropology. She also served as dean and professor at SUNY Purchase and Hunter College (CUNY), from which she retired in 2017. Her books include Being Indian in Hueyapan and Vilna on the Seine.