Searching for Meaning Inside Christianity, Judaism, Buddhism, and Islam 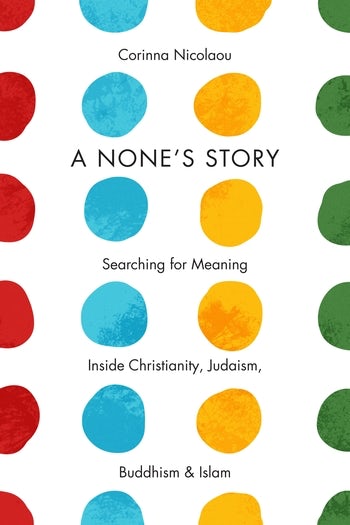 Searching for Meaning Inside Christianity, Judaism, Buddhism, and Islam

The rising population known as "nones" for its members' lack of religious affiliation is changing American society, politics, and culture. Many nones believe in God and even visit places of worship, but they do not identify with a specific faith or belong to a spiritual community. Corinna Nicolaou is a none, and in this layered narrative, she describes what it is like for her and thousands of others to live without religion or to be spiritual without committing to a specific faith.

Nicolaou tours America's major traditional religions to see what, if anything, one might lack without God. She moves through Christianity's denominations, learning their tenets and worshiping alongside their followers. She travels to Los Angeles to immerse herself in Judaism, Berkeley to educate herself about Buddhism, and Dallas and Washington, D.C., to familiarize herself with Islam. She explores what light they can shed on the fears and failings of her past, and these encounters prove the significant role religion still plays in modern life. They also exemplify the vibrant relationship between religion and American culture and the enduring value it provides to immigrants and outsiders. Though she remains a devout none, Nicolaou's experiences reveal points of contact between the religious and the unaffiliated, suggesting that nones may be radically revising the practice of faith in contemporary times.

A None's Story packages sociology and history into an engaging personal story that puts a human face on the fast-growing movement of the 'nones' in American religious life. Nicolaou's spiritual peregrinations are presented in ways that are informative and also frankly fun. Jana Riess, senior columnist, Religion News Service

Nicolaou's writing is full of intelligence, curiosity, and honesty. In her quest for spiritual identity, she touches on one of our deepest desires: to live a life of meaning and connection in a world that too often feels radicalized and divided. A None's Story is more than a memoir: it is an exploratory map that we might follow to better understand our own journeys toward an understanding of faith, its failures, and its rewards. Kim Barnes, author of In the Wilderness: Coming of Age in Unknown Country

Nicolaou puts flesh and blood on one of the most important trends in religious America: the rise of the 'nones,' people who claim no religious affiliation yet aren't atheists either. From mosque to church to synagogue to Zen temple, she approaches her quest with a keen eye and a big heart—as well as a welcome dash of humor. A None's Story is a book everyone will enjoy. Eric Weiner, New York Times best-selling author of Geography of Genius: A Search for the World's Most Creative Places from Ancient Athens to Silicon Valley

Perfect for those looking to ground themselves in the overlapping but often contradictory morals of the world's major religions, Nicolaou's book vividly and respectfully unpacks the nature of spiritual practice. Publishers Weekly

Corinna Nicolaou has taken up a journey that, as a None, thrilled me in its scope and intention. With humor, humility, and grace, she reveals the threads of history and humanity that connect us all. Megan Kruse, author of Call Me Home

Beautifully, humorously, and respectfully recounted, Nicolaou's journey is proof of the good that can be found in and learned from those who neither look nor believe like us. Booklist

Nicolaou's quest to find inner peace through in-depth participation in Christianity, Judaism, Buddhism, and Islam is not only informative in a remarkably even-handed and clear-headed way, but also compelling, inspiring, insightful, moving, and often funny. Shelf Awareness

Commended, 2016 Named a top 10 religion and spirituality book for 2016 by Booklist

Corinna Nicolaou is a writer whose work has appeared in the Washington Post, Los Angeles Times, Texas Observer, Salon, and Narrative Magazine, among other publications. Her commentaries have aired on National Public Radio's All Things Considered, and her writing can be found on her blog, One None Gets Some: Looking at Life Through the Lens of Faith.