A People's History of India 23 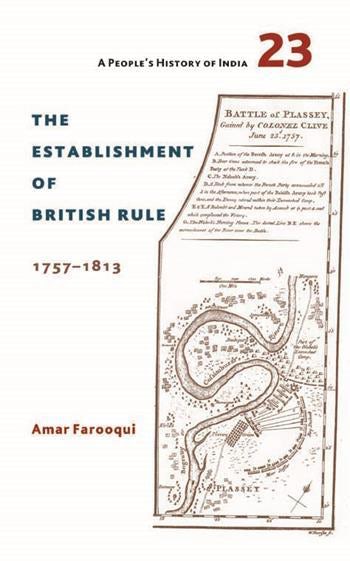 A People's History of India 23

This book deals with the establishment and expansion of British rule from the Carnatic Wars and the Battle of Plassey to the enactment of the Charter Act of 1813, which divested the East India Company of its monopoly over the commerce with England, and this opened the chapter of India's 'de-industrialization' through free trade. The monograph examines the military and other causes of British success and the cost of that success that the Indian people had to bear. A long chapter is devoted to the construction of British colonial administration, from which all Indian elements were, by stages, weeded out. Extracts from sources enliven the narrative; and there are important notes on military technology, the 'subsidiary alliance' system, organization of the Company's 'civil service' and the construction of 'colonial knowledge' about India.

Amar Farooqui is professor of history at the University of Delhi. He taught history for many years at Hans Raj College, Delhi; and has been Fellow, Nehru Memorial Museum and Library, New Delhi. His publications include Early Social Formations (2002); Smuggling as Subversion: Colonialism, Indian Merchants and the Politics of Opium, 1790–1843 (revised edition, 2005); Opium City: The Making of Early Victorian Bombay (2006); Sindias and the Raj: Princely Gwalior, c. 1800–1850 (2011), and Zafar and the Raj: Anglo–Mughal Delhi, c. 1800–1850 (2013).