A People's History of India 30

The National Movement: Origins and Early Phase to 1918 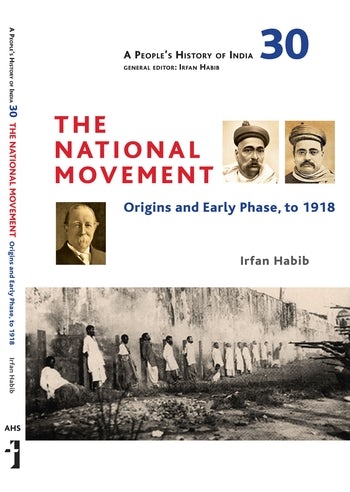 A People's History of India 30

The National Movement: Origins and Early Phase to 1918

The National Movement: The First Phase, till 1918 deals with popular resistance to colonial rule, a special position being given to the Revolt of 1857–58, its nature and legacy; the rise of national consciousness, and the factors leading to it; the movement for social reform and political awakening among the middle classes. It examines the critique of British rule by early economic nationalists as well as the foundation (in 1885), and development as a political party, of the Indian National Congress. It considers the rise of the Extremists (as against Moderates), describes the rise of communalism and the Partition of Bengal (1905), the opposition to it and the rift within the Congress, the rise of violence and the Ghadar movement (1913–15). It also considers the effect of British measures of 1909 and 1911 on the National Movement, the Congress–Muslim League Pact of 1916, the Home Rule Movement, and, finally, Gandhiji’s arrival and the agitations of 1917–18.

The volume is authored by Irfan Habib, the general editor of the A People's History of India series.

Irfan Habib is professor emeritus of history at Aligarh Muslim University. He is the author of The Agrarian System of Mughal India, 1556–1707 (1963, revised edition 1999); An Atlas of the Mughal Empire (1982); Essays in Indian History: Towards a Marxist Perception (1995); Medieval India: The Study of a Civilization (2007); Economic History of Medieval India, 1200–1500(with collaborators, 2011); and Atlas of Ancient Indian History (with Faiz Habib, 2012). He has coedited The Cambridge Economic History of India, Vol. I; UNESCO’s History of Humanity, Vols. 4 and 5; and UNESCO’s History of Central Asia, Vol. 5. He is the general editor of the People’s History of India series.