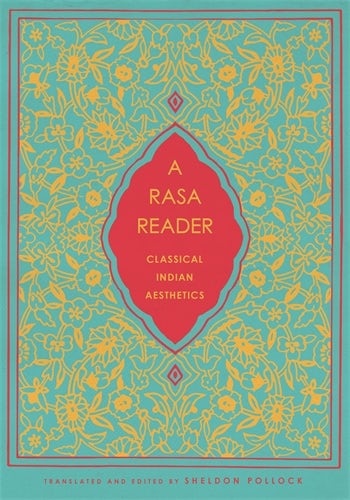 From the early years of the Common Era to 1700, Indian intellectuals explored with unparalleled subtlety the place of emotion in art. Their investigations led to the deconstruction of art's formal structures and broader inquiries into the pleasure of tragic tales. Rasa, or taste, was the word they chose to describe art's aesthetics, and their passionate effort to pin down these phenomena became its own remarkable act of creation.

This book is the first in any language to follow the evolution of rasa from its origins in dramaturgical thought—a concept for the stage—to its flourishing in literary thought—a concept for the page. A Rasa Reader incorporates primary texts by every significant thinker on classical Indian aesthetics, many never translated before. The arrangement of the selections captures the intellectual dynamism that has powered this debate for centuries. Headnotes explain the meaning and significance of each text, a comprehensive introduction summarizes major threads in intellectual-historical terms, and critical endnotes and an extensive bibliography add further depth to the selections. The Sanskrit theory of emotion in art is one of the most sophisticated in the ancient world, a precursor of the work being done today by critics and philosophers of aesthetics. A Rasa Reader's conceptual detail, historical precision, and clarity will appeal to any scholar interested in a full portrait of global intellectual development.

A Rasa Reader is the inaugural book in the Historical Sourcebooks in Classical Indian Thought series, edited by Sheldon Pollock. These text-based books guide readers through the most important forms of classical Indian thought, from epistemology, rhetoric, and hermeneutics to astral science, yoga, and medicine. Each volume provides fresh translations of key works, headnotes to contextualize selections, a comprehensive analysis of major lines of development within the discipline, and exegetical and text-critical endnotes, as well as a bibliography. Designed for comparativists and interested general readers, Historical Sourcebooks is also a great resource for advanced scholars seeking authoritative commentary on challenging works.

A Rasa Reader is the product of enormous erudition in both the Indian and European traditions of the philosophy and science of aesthetics, and it will make a unique and powerful contribution to scholars in several areas. No other work of which I am aware enables even the lay reader to grasp the elusive concept of rasa, its relationship to the psychology of emotion, and the way in which successive authors redefined the meaning and locus of the aesthetic response. Robert Goldman, University of California, Berkeley

A Rasa Reader marks a serious contribution to scholarship on rasa and promises to shape the field for a long time to come. There is certainly no one work in English or any other language that covers anything like the ground this one does. Lawrence McCrea, Cornell University

A Rasa Reader is a monumental achievement not only in giving clear translations of difficult Sanskrit texts on aesthetics but also in making complicated arguments comprehensible to the general reader. It is the missing cornerstone in the increasing availability of premodern South Asia literature in reliable translation. It is now possible for the curious reader to find his or her way with some depth into a once impenetrable field. Stephen Owen, Harvard University

Framed by Sheldon Pollock's magisterial introduction and commentary, A Rasa Reader opens out a panoramic view of one of the world's great aesthetic traditions, whose adherents blend philosophical rigor and poetic insight as they advance, dispute, and refine theories of the nature and effects of artistic expression. Discerning readers of this luminous anthology will 'become intoxicated by it'—as the great poet-critic Dandin said of poetry—'like bees by honey.' David Damrosch, Harvard University

Pollock recounts the core aesthetic concept of rasa by tracking its transformations, extensions, and exclusions. From its early appearance as a term specific to drama to its flowering as a hybrid concept bringing together emotion, eroticism, cuisine, devotion, authenticity, and response, rasa makes sense of aesthetic experiences but in a way that doesn't and shouldn't reduce to any of its near-equivalents in Greek or German philosophies of the beautiful. Comparative literature gains immensely from this detailed, historically differentiated anthology with its illuminating introduction. Haun Saussy, University of Chicago

In this bold, comprehensive, and bracing foray into classical India, Pollock confirms his reputation as a pioneering intellectual historian—the rare kind that creates a vast new field of inquiry and scholarship while provoking reappraisals of existing ideas, assumptions, and concepts. Pankaj Mishra, author of From the Ruins of Empire: The Intellectuals Who Remade Asia

This much-needed sourcebook in classical Indian aesthetics covers the period from roughly the early part of the Common Era to 1700, with a focus on emotion in art and the famous theory of rasa (a polysemous word that Sheldon Pollock correctly translates in the aesthetic context as “taste”). . . . We should be grateful to Pollock for many years of honest, hard, scholarly work resulting in this excellent, magisterial reader. Saam Trivedi, Journal of Asian Studies

The excerpts are learned, argumentative, and rich. Economic and Political Weekly

A comprehensive historical survey of the term as its significance evolves over time...the immense labor and acumen that have gone into this book need no further comment. Journal of the American Oriental Society

In his thorough critical introduction, Pollock draws connections between Sanskrit scholars and Western aesthetic theory, offering a detailed history of the ways many writers have deployed “rasa” as a concept. . .Complete with a detailed glossary of Sanskrit terms and extensive notes, Pollock’s volume invites Western scholars into the world of classical Indian aesthetic thought, beginning with texts focused on drama and poetry and expanding into the fields of music, painting, and architecture. Sean Bartley, TDR: The Drama Review

Sheldon Pollock is the Arvind Raghunathan Professor of Sanskrit and South Asian Studies at Columbia University. His publications include Literary Cultures in History: Reconstructions from South Asia (2003); The Language of the Gods in the World of Men: Sanskrit, Culture, and Power in Premodern India (2006); and World Philology (2015). He is founding general editor of the Murty Classical Library of India, recipient of the Padma Shri award from the Government of India, and fellow of the American Academy of Arts and Sciences.