A Time to Stir 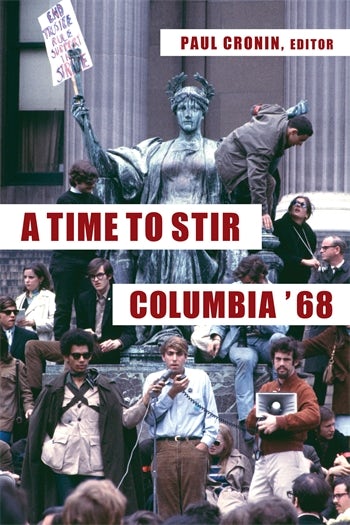 A Time to Stir

For seven days in April 1968, students occupied five buildings on the campus of Columbia University to protest a planned gymnasium in a nearby Harlem park, links between the university and the Vietnam War, and what they saw as the university’s unresponsive attitude toward their concerns. Exhilarating to some and deeply troubling to others, the student protests paralyzed the university, grabbed the world’s attention, and inspired other uprisings. Fifty years after the events, A Time to Stir captures the reflections of those who participated in and witnessed the Columbia rebellion.

With more than sixty essays from members of the Columbia chapter of Students for a Democratic Society, the Students’ Afro-American Society, faculty, undergraduates who opposed the protests, “outside agitators,” and members of the New York Police Department, A Time to Stir sheds light on the politics, passions, and ideals of the 1960s. Moving beyond accounts from the student movement’s white leadership, this book presents the perspectives of black students, who were grappling with their uneasy integration into a supposedly liberal campus, as well as the views of women, who began to question their second-class status within the protest movement and society at large. A Time to Stir also speaks to the complicated legacy of the uprising. For many, the events at Columbia inspired a lifelong dedication to social causes, while for others they signaled the beginning of the chaos that would soon engulf the left. Taken together, these reflections present a nuanced and moving portrait that reflects the sense of possibility and excess that characterized the 1960s.

This kaleidoscopic book does justice, at last, to the vortex of energies, passions, and illusions that boiled up in the cauldron of Columbia 1968. In A Time to Stir, the indefatigable Paul Cronin has assembled a fascinating range of chronicles and revelations that greatly illuminate one of the central confrontations of the sixties. Todd Gitlin, author of The Sixties: Years of Hope, Days of Rage

In this richly contextualized collection of essays written by participants involved in the student protests at Columbia University in the spring of 1968, historian Paul Cronin treats the topic as comprehensively as possible. A Time to Stir showcases a broad range of perspectives, draws out numerous themes, and reminds us why the Columbia rebellion remains relevant today. A Time to Stir also makes for dramatic, exciting, and provocative reading. This is can't-put-it-down history. John McMillian, Georgia State University

A Time to Stir creates an extraordinary, fair-minded portrait of Columbia '68 and the effect it had on many of its participants. The myth is still out there of elite '60s-era student protesters leaving behind their radical youths soon after graduation. Columbia '68ers did not as a whole simply put their radical student days behind them but instead used their experiences and changed viewpoints to build new progressive lives that affected American society. David Farber, University of Kansas

By collecting and arranging the testimonies of the historical actors who participated in perhaps the most well-known American student rebellion in the post-WWII era, A Time to Stir has issued a favor to future researchers. The breadth of perspectives in the book will pay deep dividends for those seeking to understand youth, power, and institutional change. Stefan Bradley, Loyola Marymount University

A Time to Stir: Columbia ’68 is a stunning achievement of historical perspective, grappling with an incendiary moment defined only by passion and pandemonium. The final result is the opposite of an organized consensus; the voices are older, wiser, but their stories still surge in an unbroken thread with their beliefs from half a century ago. The Bowery Boys

A Time to Stir: Columbia ’68 is an excellent source book and will no doubt be of great value to future historians of the Sixties. Jonah Raskin, CounterPunch

A remarkable collection. Frank A. Guridy, The Columbia Daily Spectator

A Time to Stir enables us to receive a comprehensive understanding of those seven days of chaos on the university’s campus, as it serves as a platform for the views of individuals from different and opposing sides. . . . This meticulously edited work serves as a powerful tool to look back to this exemplary moment of student activism and willingness to fight the status quo for what is right. Public Books

A mesmerizing historical composite in which a core narrative is retold through multiple refractions. . . . The shared hope is that new generations, as if called by history, will find their own time and way to be brave and make a difference. Jeremy Varon, The American Historical Review

The wealth of detail, along with several amusing and poignant personal reflections, make it worth a read. The Sixties: A Journal of History, Politics and Culture

Exhilarating to some and deeply troubling to others, the student protests paralyzed the university, grabbed the world’s attention, and inspired other uprisings. Fifty years after the events, A Time to Stir captures the reflections of those who participated in and witnessed the Columbia rebellion. The New York History Blog

Foreword, by Paul Berman
Introduction
Chronology of Events
1. Children of the New Age, by Nancy Biberman
2. Inside Alienation, Outside Agitator, by J. Plunky Branch
3. Race and the Specter of Strategic Blindness, by Raymond M. Brown
4. Liberation News Service and the Columbia Student Revolt, by George Cavalletto
5. A Working Class Veteran’s Perspective, by Mark Donnelly
6. Constructions of Power, by Thomas Ehrenberg
7. You Gave Us Hope, by Carolyn Rusti Eisenberg
8. A People’s Prehistory of Columbia, 1968, by Bob Feldman
9. “Possibilistes” vs. “Maximalistes”: How It Went Down in Fayerweather, by Larry Garner
10. Attempting to “Hold the Center” at Columbia, 1968, by Michael Garrett
11. The Man Who Shook My Hand, by Stuart Gedal
12. In the Spirit of Reconciliation, by Bennett Gershman
13. How I Become a National News Source: Columbia’s Office of Public Information, by Ira Goldberg
14. The Jolt of Radicalization, by Ken Greenberg
15. Daddy’s Girl, by Lois-Elaine Griffith
16. The Columbia Stir-Fry, by Peter Haidu
17. The Great Morningside Rising, by Robert W. Hanning
18. From Columbia 1968 to Fort Leavenworth, by Susan Eva Heuman
19. The Essence of Spirit Is Freedom, by Neal H. Hurwitz
20. The Smartest Kids I’d Ever Met: Memories of a Columbia Rebel, by Tom Hurwitz
21. Who Be the Dominator?, by Michael Johnson
22. The Moral Obligation to Act, by Susan Kahn
23. Columbia in the Community, by Thomas M .H. Kappner
24. Mutiny in the Air, by Ted Kaptchuk
25. Liberated Fayerweather: Agony and Ecstasy While Awaiting the NYPD, by Frank Kehl
26. The Special Case of the Fayerweather Occupation, by William Keylor
27. A Time for Revolt, by Michael Klare
28. Getting Back to “Life as Normal”, by Jay Kriegel
29. The Power of Power Structure Research, by Michael Locker
30. Days of Whine and Ruses, by Phillip Lopate
31. A Time to Stir . . . Up Trouble, by Frederick K. Lowell
32. The Primary Shades of Opposition to the Columbia Occupation, by Vaud E. Massarsky
33. No More Antiwar! The Rise of the Therapeutic Left, by Michael Neumann
34. Already Dead: Inside Low Library Commune, by Hilton Obenzinger
35. A Night to Remember, by Fred Pack
36. Silence Is Compliance, by Dan Pellegrom
37. On the Air: A View from WKCR, by Jon Perelstein
38. Columbia and the Draft, by David F. Phillips
39. Impressions of a Rookie Cop, by John Poka
40. The Sound of Breaking Glass, by Henry Reichman
41. Hats and Bats, by Mike Reynolds
42. Stopping the Machine, by Eve Rosahn
43. Life on the Ledge, by Michael Rosenthal
44. How I Learned I Was a Menshevik, by Joshua Rubenstein
45. What It Takes to Build a Movement, by Mark Rudd
46. Self-Determination and Self-Respect: Hamilton Hall, Fifty Years Later, by William W. Sales Jr.
47. Long Ago and Not at All Far Away, by Bill Sharfman
48. Columbia 1968: My Course Correction, by Marvin Sin
49. Uniters, by Gene Slater
50. A Sense of Rightness, by Susan Slyomovics
51. Avery Hall to Urban Deadline, by Tyler Smith
52. Forming Community, Forging Commitment: A Hamilton Hall Story, by Karla Spurlock-Evans
53. From College Walk to the Stonewall Inn, by Peter Stamberg
54. Five Red Flags, by Eleanor Stein
55. Never Again?, by Michael Steinlauf
56. Covering—and Covering Up—Spring ’68, by Michael Stern
57. Hundreds of Pairs of Wings, by Johnny Sundstrom
58. Political Education and the Birth of Students for a Restructured University, by John Thoms
59. It’s Better to Build Up: Post-’68 Governance at Columbia, by Harold S. Wechsler
60. A Foot Soldier’s Story of the Sit-Ins, by Meredith Sue Willis
61. From Community Service to Political Action: The Evolution of the Citizenship Council, by Joel D. Ziff
Afterword by Juan Gonzalez
Index

Paul Cronin’s books include Werner Herzog: A Guide for the Perplexed (2014) and Lessons with Kiarostami (2015). His films include a study of Haskell Wexler’s Medium Cool and, to accompany this book, a multichapter documentary on the Columbia University protests of 1968. He teaches at the School of Visual Arts in New York. His website is www.atimetostir.com.