Down and Out in New Orleans

Transgressive Living in the Informal Economy 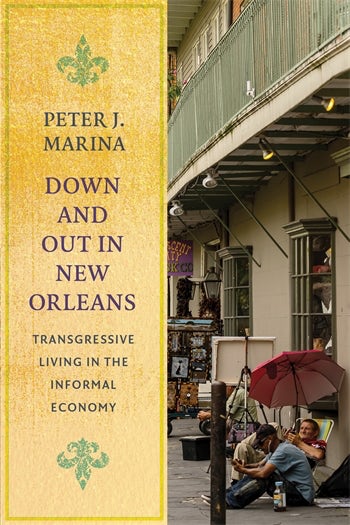 Down and Out in New Orleans

Transgressive Living in the Informal Economy

In the years since Hurricane Katrina, the modern-day bohemians of New Orleans have found themselves forced to the edges of poverty by the new tourist economy. Modeling his work after George Orwell’s Down and Out in Paris and London, the sociologist and ethnographer Peter J. Marina explores this unfamiliar side of the gentrifying “new” New Orleans. In 1920s Paris, Orwell witnessed an influx of locals and outsiders seeking authenticity while struggling to live with bourgeois society. Marina finds a similar ambivalence in New Orleans: a tourism-dependent city whose commerce caters largely to well-heeled natives and upper-class travelers, where many creative locals and wanderers have remained outsiders, willingly or otherwise.

Marina does not merely interview these spirited urban misfits—he lives among them. Down and Out in New Orleans follows their journeys, depicting the lives of those on the social fringes of a resilient city. Marina finds work as a bartender, street mime, and poet. Along the way, he visits homeless shelters, squats in abandoned buildings, attends rituals in cemeteries, and befriends writers, musicians, occultists, and artists as they look for creative solutions to the contradictory demands of late capitalism. Marina does for New Orleans what Orwell did for Paris a century earlier, providing a rigorous, unrelenting, and original glimpse into the subcultures of a city in rapid change.

Peter J. Marina provides an outstanding introduction to the sociology of transgression through his fascinating portrayal of life on the edge in post-Katrina New Orleans. His sociological insight, ethnographic ability, and love of the city uniquely position him to write about the sociology of living ‘down and out’ in the Crescent City. David Gladstone, University of New Orleans

Following where Orwell went, Marina takes us on a fascinating odyssey into the pulsating heart of New Orleans. From among the city’s weird and outlandish nomadic fringe, we are invited to witness how life in NOLA is lived and negotiated, its culture produced and consumed by its most creative denizens. This is immersive ethnography at its best: moving, engaging, and challenging. Read it. Simon Hallsworth, University of Suffolk

Marina’s Down and Out in New Orleans takes us on a sweet, sweaty shamble through what some might call the ‘underbelly’ of New Orleans. Reading Marina’s beautifully attentive account, though, you realize that ‘underbelly’ is the wrong corporeal metaphor—because in reality the down-and-out quarters of New Orleans are its hard-beating heart, around which hangs the dangerous dead weight of gentrification, privilege, boredom, and security. Jeff Ferrell, author of Tearing Down the Streets and Empire of Scrounge

Down and Out in New Orleans offers a vivid portrait of that city, especially its artistic characters, their neighborhoods, and the down-and-out jobs they take. The author, whose fierce love for his hometown glows on every page, brings New Orleans culture into focus and provides an illuminating perspective on its future. Elijah Anderson, Yale University

Marina takes readers on a tour of the New Orleans you won’t see on postcards or in tourism commercials. His New Orleans is a lived-in, off-the-beaten-path place . . . occupied by a mix of dropouts, dreamers, and those who simply choose to march to the beat of their own drum. The result is a work that will equally serve sociologists, anthropologists and those who are simply interested in seeing another side of one of the country’s most fascinating cities. Mike Scott, The Times-Picayune

Foreword, by David Brotherton
Acknowledgments
1. New Orleans: Romancing the City of Sin and Resistance
2. The Hard and Soft City: A Portrait of New Orleans Neighborhoods and Their Characters
3. Living Down and Out in New Orleans
4. Buskers, Hustlers, and Street Performers
5. The Informal Nocturnal Economy of Frenchmen Street
6. City Squatting and Urban Camping
7. Occultists and Satanists
8. Gentrification and Violent Cultural Resistance
9. Hipster Wonderland
10. Brass Bands and Second Lines
Conclusion: The Fogs of New Orleans and the Future of the Crescent City
Notes
Index

Peter J. Marina is associate professor of sociology at University of Wisconsin–La Crosse. He is the author of Chasing Religion in the Caribbean: Ethnographic Journeys from Antigua to Trinidad (2016).