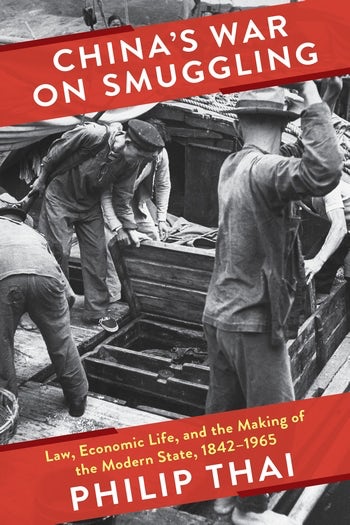 Smuggling along the Chinese coast has been a thorn in the side of many regimes. From opium and weapons concealed aboard foreign steamships in the Qing dynasty to nylon stockings and wristwatches trafficked in the People’s Republic, contests between state and smuggler have exerted a surprising but crucial influence on the political economy of modern China. Seeking to consolidate domestic authority and confront foreign challenges, states introduced tighter regulations, higher taxes, and harsher enforcement. These interventions sparked widespread defiance, triggering further coercive measures. Smuggling simultaneously threatened the state’s power while inviting repression that strengthened its authority.

Philip Thai chronicles the vicissitudes of smuggling in modern China—its practice, suppression, and significance—to demonstrate the intimate link between illicit coastal trade and the amplification of state power. China’s War on Smuggling shows that the fight against smuggling was not a simple law enforcement problem but rather an impetus to centralize authority and expand economic controls. The smuggling epidemic gave Chinese states pretext to define legal and illegal behavior, and the resulting constraints on consumption and movement remade everyday life for individuals, merchants, and communities. Drawing from varied sources such as legal cases, customs records, and popular press reports and including diverse perspectives from political leaders, frontline enforcers, organized traffickers, and petty runners, Thai uncovers how different regimes policed maritime trade and the unintended consequences their campaigns unleashed. China’s War on Smuggling traces how defiance and repression redefined state power, offering new insights into modern Chinese social, legal, and economic history.

Philip Thai skillfully explores how smuggling remade the Chinese state by enabling it to establish better protection of its borders and its revenues and by standardizing regulations; he also examines the ways that political and economic disruptions constantly challenged this process. Thai weaves together a creative combination of social, political, economic, and legal history, ranging from a sophisticated technical discussion of tariff autonomy to a clever explication of the visual representation of smuggling in the public imagination of 1930s China. The combination of a broad theme—illicit economic activities interacting with state power—with many smaller case studies of smuggling incidents brings the story alive. Elisabeth Köll, University of Notre Dame

Breaking chronological and geographic conventions, this important book places Nationalist-period state-building and the struggle for sovereignty in a framework of the long-term growth of infrastructural state power in China. By linking the rise of policing, legal regulation of production and consumption, and government intrusion in the economy with the operation of markets and economic life, Philip Thai accomplishes the remarkable feat of a fresh perspective on China from the bottom to top. Brett Sheehan, University of Southern California

Thai provides a fresh, insightful take on the development of the modern state during a period of dramatic change and challenges. China’s War on Smuggling will appeal to those interested in the history of commerce, law, and criminology in modern China. Laurie Dickmeyer, New Books in East Asian Studies

China’s War on Smuggling is a fascinating study of the complicated links between tariff policy, smuggling, and the development of the modern Chinese state. . . . Thai’s book will be of interest to economic and fiscal historians, but also to those concerned with how the Chinese state was able to strengthen its capacity to control markets and trade. Linda Grove, The Economic History Review

His work will be of interest for both historians and scholars of Chinese studies, especially those who seek to
understand how defiance and repression shaped and reshaped state power in China. Strategic Analysis

Thai makes important contributions across the fields of Qing, Republican, and PRC history, and his book will be required reading for scholars and students of late imperial and modern China. Peter Thilly, Journal of Asian Studies

A remarkable history of the Chinese state’s war against coastal smuggling from the mid-nineteenth through the mid-twentieth centuries. Criminal Law and Criminal Justice Books

Philip Thai is assistant professor of history at Northeastern University.