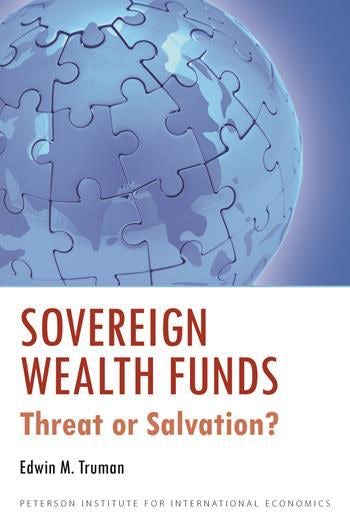 Sovereign wealth funds or their equivalent pose profound issues for the countries that own them with respect to macroeconomic policy and the potential for corruption. They also raise issues for countries that receive SWF investments as well as for the international financial system as a whole because government ownership introduces potential political and economic power issues into the management of these cross-border assets. This study traces the origins of SWFs. It describes the issues raised by these large governmental holdings of cross-border assets for the countries that own them, for the host countries, and for the international financial system. The study lays out what is known about the 50-plus SWFs of various countries. Some countries have more than one such entity, and a sample of government-managed pension funds is included in this analysis because they raise most of the same basic policy issues.

Using publicly available information that is provided on a systematic basis, the author has previously developed a "scoreboard" for these funds involving a number of elements grouped in four categories: structure, governance, transparency and accountability, and behavioral rules. The 2008 edition contributed to the development of a set of generally accepted principles and practices, the Santiago Principles, for SWFs by the International Working Group operating under the auspices of the International Monetary Fund. This publication presents an updated scoreboard for an expanded list of funds, evaluates the Santiago Principles, and examines current compliance with those principles. The study also examines the policies of recipient countries and the role of the Organization for Economic Cooperation and Development (OECD) investment codes. Finally, the study discusses the evolving role of SWFs in the context of the global economic and financial crisis and its aftermath and will make recommendations for the policies of countries both managing such funds and those that expect to receive investments from them in the future.

Dr. Truman is a distinguished scholar who has been analyzing sovereign wealth funds for the last several years. His work has been influential in the development of the Santiago Principles, a voluntary code of behavior, transparency and accountability adopted by most countries with large sovereign wealth funds. This is an invaluable book for anyone interested in a serious and objective analysis of these funds—their origins, their objectives, their differences across countries, their effects on the global economy, and their consequences for international economic policy. Laura D'Andrea Tyson, University of California Berkeley, and former chair of the Council of Economic Advisers

Edwin M. Truman, nonresident senior fellow since July 2013, joined the Peterson Institute for International Economics as senior fellow in 2001. Previously he served as assistant secretary of the US Treasury for International Affairs from December 1998 to January 2001 and returned as counselor to the secretary March–May 2009. He directed the Division of International Finance of the Board of Governors of the Federal Reserve System from 1977 to 1998. From 1983 to 1998, he was one of three economists on the staff of the Federal Open Market Committee.