Confronting Moral Conflicts in the Era of Globalization 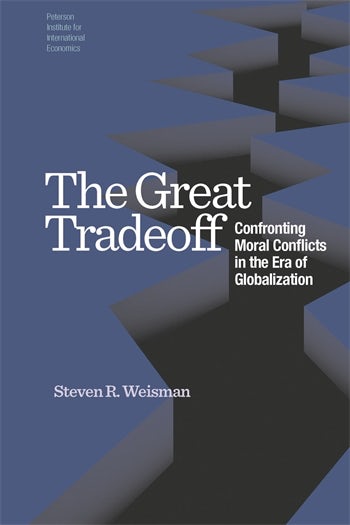 Confronting Moral Conflicts in the Era of Globalization

The global financial and economic crisis that began in 2008 has blasted livelihoods, inspired protests, and toppled governments. It has also highlighted the profound moral concerns long surrounding globalization. Did materialist excess, doctrinaire embrace of free trade and capital flows, and indifference to economic injustice contribute to the disaster of the last decade? Was it ethical to bail out banks and governments while innocent people suffered?

In this blend of economics, moral philosophy, history, and politics, Steven R. Weisman argues that the concepts of liberty, justice, virtue, and loyalty help to explain the passionate disagreements spawned by a globally integrated economy.

These questions have absorbed my former colleague Steven Weisman of the Peterson Institute for International Economics for some years now. His new book, The Great Tradeoff: Confronting Moral Conflicts in the Era of Globalization, provides an excellent text for the discussion we need. Weisman painstakingly avoids dogmatism and is careful in laying out the often-agonizing choices we face. E. J. Dionne Jr., WASHINGTON POST

I only wish that this book had been written when I was still teaching at Syracuse. I would surely have assigned it. It's an important achievement that a lot of people should understand. I think that this tradeoff between moral concepts and indeed the interplay between morals and markets is something that we deemphasize in our modern understanding of economics. Arthur C. Brooks, American Enterprise Institute

This was an exceptional piece of work. It was obviously well written because that's what he's been doing for a long time. It was thoughtful because he's a thoughtful guy. It was incredibly researched as you heard him and Arthur Brooks describe. And it was balanced. Steven Rattner, former counselor to the Secretary of the US Treasury

Steven R. Weisman, vice president for publications and communications, joined the Peterson Institute in 2008. He had previously been the chief international economics correspondent of the New York Times as well as a member of its editorial board. His work has appeared in the Times Book Review, Times Magazine, and the paper's news, features, and culture sections since 1968.