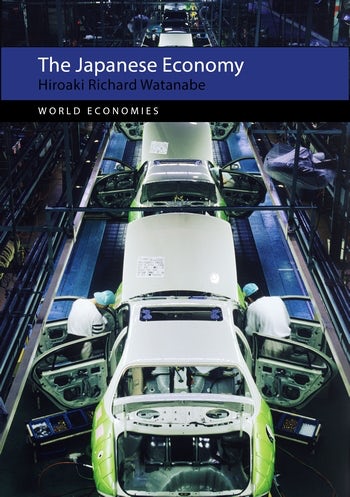 The Japanese economy was once considered a “miracle”. Although still the world’s third largest economy, it continues to feel the effects of the collapse of a massive asset price bubble in the early 1990s. In recent years further setbacks, including both the Asian and global financial crises, and the 2011 Fukushima earthquake, have only added to the economy’s difficulties and made its prospects under Abenomics at best mixed.

Hiroaki Richard Watanabe examines the ups and downs of Japan’s postwar economic history to offer an up-to-date and authoritative guide to the workings of Japan’s economy. He highlights the country’s distinct modes of business network and Japan’s state–market relationship. He explores the characteristic institutional complementarity that exists among different sectors and business practices and gives particular attention to human factors, such as labour market dualism (inequality between regular and non-regular workers), gender discrimination and migration not to mention the disturbing phenomenon of karoshi (death by overwork). Although often associated in Western minds with futuristic automated efficiency Watanabe shows that Japan’s economy retains many inefficient practices that do not comply with global standards and which exhibit a longer history of economic nationalism and the legacy of a developmental state.

The book provides readers with a concise survey of Japan’s recent economic history, its characteristic features and the challenges it continues to face, from economic stagnation to an ageing population. It also reflects on what Japan’s experience suggests for its own future and its regional and global economic integration.

Hiroaki Richard Watanabe is a Lecturer in the School of East Asian Studies at the University of Sheffield. His books include Labour Market Deregulation in Japan and Italy (Routledge, 2014).