Improvising Politics on the European Stage 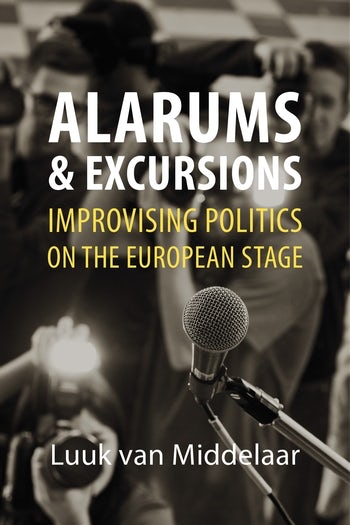 Improvising Politics on the European Stage

Crisis after crisis has beset the European Union in recent years—Greek sovereign debt, Russian annexation of Crimea, unprecedented levels of migration, and the turmoil created by Brexit. An organization originally designed to regulate and enforce rules about fishing rights, wheat quotas, and product standards has found itself on the global stage forced to grapple with problems of identity, sovereignty, and solidarity without a script or prompt. From Paris to Berlin, London to Athens, European leaders have had to improvise on issues that the Union was never set up to handle and which threaten to engulf this unique political entity. And they have had to do so in full view of an increasingly disenchanted and dissonant public audience.

In this candid and revealing portrayal of a Europe improvising its way through a politics of events and not rules, Luuk van Middelaar makes sense of the EU’s political metamorphosis over its past ten years of crisis management. Forced into action by a tidal wave of emergencies, Van Middelaar shows how Europe has had to reinvent itself by casting off its legal straitjacket and confronting hard issues of power, territorial borders and public authority.

Alarums and Excursions showcases the fascinating relationship between the Union and the European heads of government, and the stresses it must withstand in dealing with real world events. For anyone seeking to understand the inner power play and constitutional dynamics of this controversial, but no less remarkable, political institution, this book provides compelling reading.

A brilliant series of case studies that illuminate different points in the creation of a new European political theater unscripted by the innumerable treaties and rules that created the EU as we know it today. James McAuley, New York Review of Books

Refreshing and perceptive. . . . Van Middelaar is a more thoughtful guide than most to these [EU] institutions and events, in part because he brings the eye of a political theorist to his years working for the European Council president. Financial Times

Part insider memoir and part commentary, this is probably the best analysis yet to appear of how the EU managed its recent crises over refugees, Ukraine, and the euro. Foreign Affairs

Quite simply the most insightful book on Europe’s politics today. A unique blend of behind-the-scenes knowledge, compelling ideas, and powerful political judgement. History is back, not as a script, Luuk van Middelaar shows, but as a living entity, and the choice is ours: do we want to play or be played? The book is a great toolkit, not only for a better performance of Europe’s political actors, but also to cope with the cheers and booing of the European public. Donald Tusk, president of the European Council

Luuk van Middelaar is a historian and political theorist. In his role as a speechwriter and close advisor to the president of the European Council (2010–15), van Middelaar witnessed the political theater of Europe from the first row. He now works as an author and academic. His previous book, The Passage to Europe (winner of the 2012 European Book Prize), has been translated into more than ten languages.