The Contradictions of Capital in the Twenty-First Century 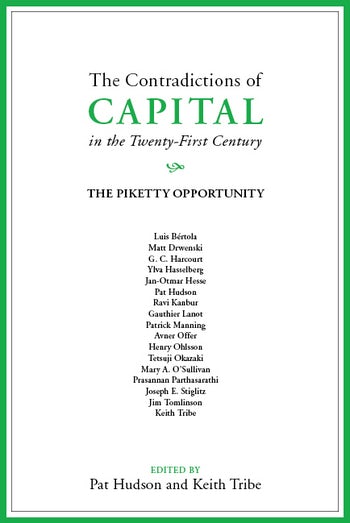 The Contradictions of Capital in the Twenty-First Century

This volume of essays builds upon renewed interest in the long-run global development of wealth and inequality stimulated by the publication in 2014 of Thomas Piketty's Capital in the Twenty-First Century. It brings together an international team of leading economic historians and economists to provide a comprehensive overview of global developments in the theory, practice, and policy of inequality, and its place in the modern world order.

The contributors take stock of the key concepts involved – capital, wealth and income, inequality, economic development, financialization – and evaluate the evidence for historical trends in existing national statistical data sources. To the developed economies upon which Piketty drew are added contributions covering Latin America, Africa, India, and Japan, providing a global perspective upon a global phenomenon.

The book seeks to provide readers with a deeper awareness and understanding of the significance of equality and inequality in economic development, the varying pace of economic change around the world, and the manner in which this process of change affects the distribution of wealth and inequality in diverse economies. The collection marks an important step in the process of developing Piketty's analytical framework and empirical material, overcoming its limitations and helping to cement a lasting place for inequality in the agenda of growth theory.

This splendid book validates Thomas Piketty's Capital precisely through its lucid, comprehensive and in places devastating critique of his capital theory and empirical methods, with rich detail on France, Germany, Sweden, the UK and the US, as well as Japan, Africa and India. As companion reading or on its own, Contradictions is a landmark, a model of scholarly engagement at the highest level. James K. Galbraith, author of Inequality: What Everyone Needs to Know and Lloyd M. Bentsen Jr. Chair in Government/Business Relations, Lyndon B. Johnson School of Public Affairs, University of Texas at Austin

This excellent volume effectively exploits and builds on 'the Piketty opportunity': the contested new terrain created by Thomas Piketty's challenge to mainstream economics and economic history. With their deep knowledge of the history of the study of inequality in various regions of the world and in the discipline of economics, the contributors engage critically with Piketty's Capital in the Twenty-First Century to provide a plethora of new insights and important alternative policy proposals. This volume demonstrates why public policy-makers need to pay full attention to historians in grappling with the political trilemma of our age posed by Piketty: democracy, capitalism and inequality. Simon Szreter, Professor of History and Public Policy, University of Cambridge

Hudson and Tribe have edited an intellectually stimulating collection. LSE Review of Books

Pat Hudson is emeritus professor of history at Cardiff University. Her books include The Industrial Revolution (1992) and History by Numbers: An Introduction to Quantitative Approaches (2000). Most recently, she coedited with Francesco Boldizzoni The Routledge Handbook of Global Economic History (2016).

Keith Tribe taught economics at Keele University in the 1980s and 1990s before taking early retirement in 2002. Since then he has continued to write, translate, and teach. He is currently teaching the history of economics at the University of Birmingham. His books include Governing Economy (1988), Strategies of Economic Order (1995/2007) and The Economy of the Word (2015).