The Political Economy of Brexit 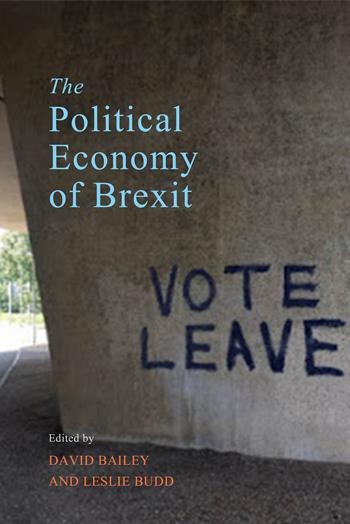 The Political Economy of Brexit

The UK's vote to leave the European Union is a pivotal moment in British history. Over the past forty years, the UK's economy has become increasingly intertwined and dependent on its relationship with the other EU member states with both the EU and the UK's economic landscape irrevocably fashioned by its membership. Brexit takes both parties into uncharted territory. At such a time of uncertainty, what can we say for certain about the UK's economic relationship with the EU and what might be the likely flashpoints for negotiations and the unintended consequences of Brexit?

This collection of essays explores the ramifications of the Brexit decision for the UK and European economies. The contributors, who all draw on long experience of policy-oriented research on the British economy within the European Union, consider the impact, at least in the short term, of a weaker and less influential UK economy. Questions addressed include: What is the likely impact on our already weak manufacturing industries? How will the withdrawal of EU funding for regional development impact on growth and future economic development outside of London and the South East? What is the likely impact on wages and labor regulations? How are relations with our closest EU neighbors likely to develop, critically for Northern Ireland with the Republic of Ireland, and with the biggest economic player, Germany? What of the Scottish question? How will the City, the engine of UK growth in the past decade, maintain its position as Europe's financial center? And finally, whither the EU? How will it fare without its second largest economy within the Union?

With the UK's withdrawal negotiations likely to last for at least the next two years, and the potential for other calls for referendums in other member states, the economic consequences of leaving the European Union are set to dominate politics in the UK and Europe well in to the future. These essays provide an important first step in assessing the threats and challenges that a Brexit poses for the UK and wider EU economy and will be welcome reading for anyone in search of some rigor and clarity amid the hyperbole of recent months.

A timely and important book dealing in admirable detail and with great clarity with what must rank as the biggest single issue facing Britain today. Anand Menon, Professor of European Politics and Foreign Affairs, King's College London, and Director of the UK in a Changing Europe initiative

An excellent and very timely book with many profound insights. The post-Brexit challenges ahead are real, as are the potential opportunities, and this book helps us to navigate a way through these newly-emerging realities. Philip McCann, Professor of Economic Geography, University of Groningen

An indispensable guide to the complex issues of political economy that Brexit has thrown up. As there is still so much uncertainty about Britain's future relationship with the EU, research and clear insight into how Brexit might affect the different nations, regions and business sectors of the UK is vital. This volume provides just such material. Nick Pearce, Professor of Public Policy, University of Bath

I have no doubt future generations of researchers will acknowledge The Political Economy of Brexit as one of the most important books written by social scientists in the second decade of the twenty-first century. It is a book loaded with meaning and rich in insights for those working in industrial policy, geography, planning, politics, sociology, regional research and urban studies. Importantly, it allows the reader to understand how mass discontent with the impacts of globalization fuelled Brexit and the implications of this vote for the future of all Europe. But its relevance is not limited to the UK. The Political Economy of Brexit provides a rubric for understanding the future economic and political trajectory of many parts of the developed world, including the United States, France, Germany and Australia. A must read. Andrew Beer, Dean of Research and Innovation, University of South Australia Business School

Leslie Budd is reader in social enterprise at The Open University Business School.