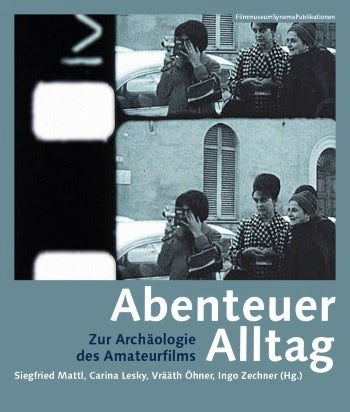 During the past decade, the international study of non-theatrical cinematic forms has seen a strong expansion – with amateur film as a central area of research. Changing collection policies in film archives and museums and new forms of digital access are not the only reasons for this interest. However, the major impulse to current debates comes from contributions based on an analysis of archival holdings. Abenteuer Alltag. Zur Archäologie des Amateurfilms is the first German-language publication to give an overview of amateur film research in Europe, presenting essays on topics such as the politics and history, the technology and aesthetics, as well as the bodies and spaces of amateur film. In addition, several European and American film archives provide information about their collection strategies.

Siegfried Mattl is director of the Ludwig Boltzmann Institute for History and Society, his research interests include Visual History, Contemporary History, Cultural Studies and Urban Studies.

Carina Lesky is a research associate at the Ludwig Boltzmann Institute for History and Society. Her research interests lie in the fields of cultural studies, film studies, media archeology and urban studies. Vrääth Öhner is University Assistant (PostDoc) at the Department of Theatre, Film and Media Studies, University of Vienna. His current research focuses on amateur film. Ingo Zechner is associate director of the IFK International Research Center for Cultural Studies. His current research focuses on ephemeral films and Holocaust Studies.