The Art of Showing Nothing 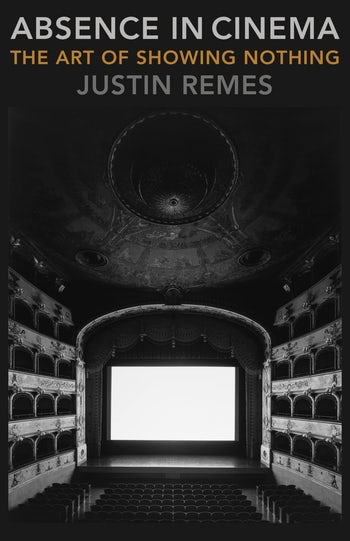 The Art of Showing Nothing

Absence has played a crucial role in the history of avant-garde aesthetics, from the blank canvases of Robert Rauschenberg to Yves Klein’s invisible paintings, from the “silent” music of John Cage to Samuel Beckett’s minimalist theater. Yet little attention has been given to the important role of absence in cinema. In the first book to focus on cinematic absence, Justin Remes demonstrates how omissions of expected elements can spur viewers to interpret and understand the nature of film in new ways.

While most film criticism focuses on what is present, such as images on the screen and music and dialogue on the soundtrack, Remes contends that what is missing is an essential part of the cinematic experience. He examines films without images—such as Walter Ruttmann’s Weekend (1930), a montage of sounds recorded in Berlin—and films without sound—such as Stan Brakhage’s Window Water Baby Moving (1959), which documents the birth of the filmmaker’s first child. He also examines found footage films that erase elements from preexisting films such as Naomi Uman’s removed (1999), which uses nail polish and bleach to blot out all the women from a pornographic film, and Martin Arnold’s Deanimated (2002), which digitally eliminates images and sounds from a Bela Lugosi B movie. Remes maps out the effects and significations of filmic voids while grappling with their implications for film theory. Through a careful analysis of a broad array of avant-garde works, Absence in Cinema reveals that films must be understood not only in terms of what they show but also what they withhold.

Absence in Cinema is a dazzling, meticulously detailed, even revolutionary work. Remes's style is so assured with such a light and knowing touch that the reader is propelled through the book from first page to last. Wheeler Winston Dixon, author of Synthetic Cinema: The 21st Century Movie Machine

Justin Remes is assistant professor of film studies at Iowa State University. He is the author of Motion(less) Pictures: The Cinema of Stasis (Columbia, 2015).