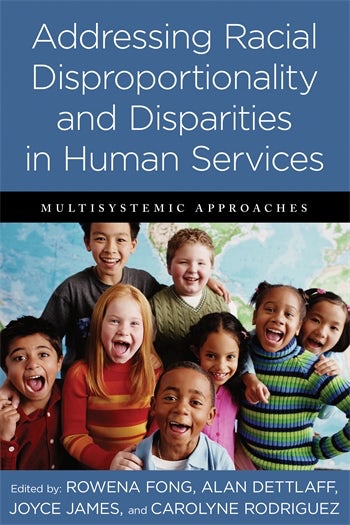 Eliminating Racial Disproportionality and Disparities examines a wide range of systems that often affect and interact with child welfare. Chapters are devoted to the juvenile justice system, mental health, the courts, education, and healthcare, making it the only book to offer a multisystemic approach to disparities and disproportionality. Filled with in-depth case studies, key terms, study questions, and resources, and written to reflect CSWE-mandated competencies, this expansive book gives students, educators, policymakers, practitioners, and administrators new knowledge for providing culturally competent services while simultaneously addressing disproportionality across various systems of care.

This is the most comprehensive book on the topic of racial disproportionality across both populations and systems. Dorothy Roberts, University of Pennsylvania Law School

A rich piece of work that can take practitioners and policymakers in concrete directions toward dismantling Disproportionate Minority Contact. Julia Kleinschmit, University of Iowa, Community Initiative for Native Children and Families

An excellent read for those who want to learn more about the dynamics of human service systems. Journal of Teaching in Social Work

Alan Dettlaff is associate professor in the Jane Adams College of Social Work at the University of Illinois at Chicago. His research focuses on eliminating racial disparities and improving outcomes for African Americans and Latinos. He is cochair of the Migration and Child Welfare National Network, a coalition of individuals and organizations focused on the needs of immigrant families involved in the child welfare system. Dettlaff is an Institute for Research on Race and Public Policy faculty fellow; a member of the Child Welfare League of America National Advisory Council on Cultural Competence and Disproportionality; and editorial board member for Child Abuse & Neglect and Journal of Public Child Welfare.

Joyce James is the former associate deputy executive commissioner of the Center for Elimination of Disproportionality and Disparities and the Texas State Office of Minority Health at the Texas Health and Human Services Commission. As a thirty-four year professional in child welfare and health and human services, she has been an influential voice on institutionalized racism as the root cause of disproportionality and racial inequities in systems serving children and families. Her work was the driving force behind Senate Bill 6 of the 79th Legislative Session, which made Texas the first state to establish a statute to address disproportionality. As the former Texas Child Welfare Director, she implemented a community engagement model currently referred to as the Texas Model for Addressing Disproportionality and Disparities that has proven effective in decreasing disproportionality for African American and Native American children and improving overall outcomes for all populations. She consults and speaks on this topic across the country and is the recipient of local, state, and national awards for her work.

Carolyne Rodriguez has worked in the child welfare field since 1970, with her most recent work focusing on broad, systemic changes in such areas as all stages of child protective services; kinship and transition services; and impacting disproportionality and disparate outcomes of children of color in the child welfare system and other related systems. She directed the systems improvement work for Casey Family Programs in Texas from 2002 through May 2013. Texas Strategic Consulting involved a collaborative effort between Casey and the state child welfare system as well as numerous stakeholders and other systems. Ms. Rodriguez retired from Casey Family Programs May 31, 2013, after more than twenty-eight years of service to the organization.