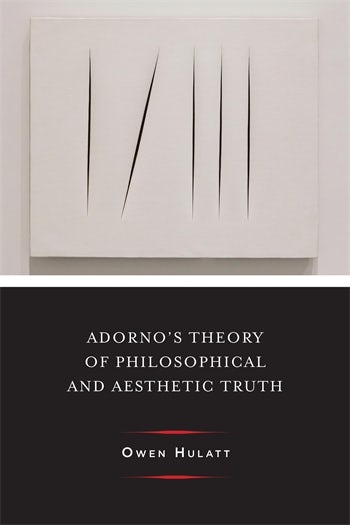 For Adorno, truth is produced when rhetorical "texture" combines with cognitive "performance," leading to the breakdown of concepts that mediate the experience of the consciousness. Both philosophy and art manifest these features, although philosophy enacts these conceptual issues directly, while art does so obliquely. Hulatt builds a robust argument for Adorno's claim that concepts ineluctably misconstrue their objects. He also puts the still influential thinker into conversation with Hegel, Husserl, Frazer, Sohn-Rethel, Benjamin, Strawson, Dahlhaus, Habermas, and Caillois, among many others.

There is no other book that more lucidly and compellingly reconstructs the difficult relationship between epistemology and aesthetics in Adorno's work. Although Adorno vigorously dismissed systematicity, the many connections that unite his central concerns are here made manifest in ways that are likely to move the debate over his legacy substantively forward. For anyone interested in the status and fate of art in modernity, this book will be a landmark. Espen Hammer, author of Adorno's Modernism: Art, Experience, and Catastrophe

Owen Hulatt has written an exceptional book. As truth takes a beating at the hands of late capitalism, Theodor W. Adorno’s assessment of the modern world and of truth becomes intimately relevant. There is a lot to recommend in this book, and it is a bold contribution to understanding Adorno. Martin Shuster, Journal of the History of Philosophy

Owen Hulatt is a teaching fellow in philosophy at the University of York and editor of Aesthetic and Artistic Autonomy (2013).