Science, Medicine, and the Transformation of Sex in Modern China 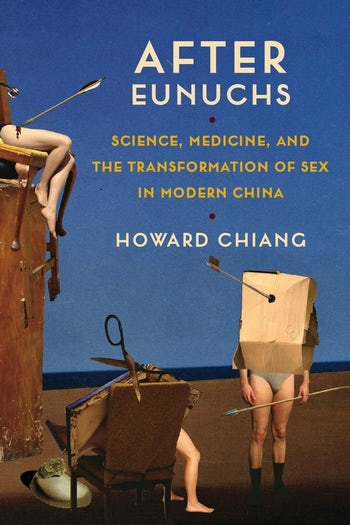 Science, Medicine, and the Transformation of Sex in Modern China

For much of Chinese history, the eunuch stood out as an exceptional figure at the margins of gender categories. Amid the disintegration of the Qing Empire, men and women in China began to understand their differences in the language of modern science. In After Eunuchs, Howard Chiang traces the genealogy of sexual knowledge from the demise of eunuchism to the emergence of transsexuality, showing the centrality of new epistemic structures to the formation of Chinese modernity.

From anticastration discourses in the late Qing era to sex-reassignment surgeries in Taiwan in the 1950s and queer movements in the 1980s and 1990s, After Eunuchs explores the ways the introduction of Western biomedical sciences transformed normative meanings of gender, sexuality, and the body in China. Chiang investigates how competing definitions of sex circulated in science, medicine, vernacular culture, and the periodical press, bringing to light a rich and vibrant discourse of sex change in the first half of the twentieth century. He focuses on the stories of gender and sexual minorities as well as a large supporting cast of doctors, scientists, philosophers, educators, reformers, journalists, and tabloid writers, as they debated the questions of political sovereignty, national belonging, cultural authenticity, scientific modernity, human difference, and the power and authority of truths about sex. Theoretically sophisticated and far-reaching, After Eunuchs is an innovative contribution to the history and philosophy of science and queer and Sinophone studies.

After Eunuchs deftly explores how the introduction of Western biomedicine transformed understandings of gender, sexuality, and the body in Chinese contexts from the twentieth century onward. Using an impressive range of sources, Chiang rescues the history of castration—perhaps one of the most notorious culturally overdetermined corporeal subjects—from the legacy of prevailing nineteenth- and early twentieth-century narratives that characterize the practice almost exclusively as backward, traditional, and oppressive. Along the way, Chiang illuminates a host of other practices and corporeal formations by challenging the many essentialisms that still inform our assumptions about the wholeness of the human body. A rich and original work. Ari Heinrich, University of California, San Diego

An important study that is both long overdue and remarkably timely. Chiang draws a controversial line between imperial China’s eunuchs and modern Taiwan’s first transsexual surgery. Tracing this path takes us through twentieth-century regimes of visuality, the impact of biological and psychiatric reasoning, and the production of sexual pathologies. With its focus on “transformations of sex,” After Eunuchs will undoubtedly renew debate about the nature of Chinese modernity. Ruth Rogaski, Vanderbilt University

Howard Chiang’s After Eunuchs is a persuasive history of how, between 1870 and 1930, bio-scientization of sex was normalized in China. This strongly evidenced, briskly written, imaginative work takes a bold step into describing conditions for thinking about sexual and therefore gender difference. It appeals across the disciplines and enters into general debates about the science and history of sex difference, sexual desire, sex morphology, and queer theory. Tani Barlow, Rice University

Chiang’s After Eunuchs presents a fascinating genealogical dissection of the epistemology of gender mutability, intersexuality, and transsexuality in modern Chinese history. LSE Review of Books

After Eunuchs is both a fascinating tour of the construction and deconstruction of sexuality in the Chinese‐speaking (Sinophone) world and a significant theoretical contribution to historical understandings of the creation of global medical and scientific modernity. The Historian

After Eunuchs is an imaginative and erudite account of sex, science and Chinese modernity...a must read
for scholars interested in the East Asia and Sinophone studies, the history of science and medicine, as well as sexuality and queer studies. Social History of Medicine

An important contribution to the history of global sexuality in multiple ways. Gender and History

[After Eunuchs] is very much a worthwhile read, and moreover, meticulously researched. Journal of the History of Medicine and Allied Sciences

A monumental study that rethinks China’s modernity through the historical intersection of science and sexuality. . . . Chiang demonstrates the crucial roles of nonwestern societies in the history of sexuality, queer studies, as well as producing and transmitting scientific knowledge. Canadian Journal of History

Howard Chiang is associate professor of history at the University of California, Davis. He is the coeditor of Perverse Taiwan (2016) and editor of Sexuality in China: Histories of Power and Pleasure (2018).