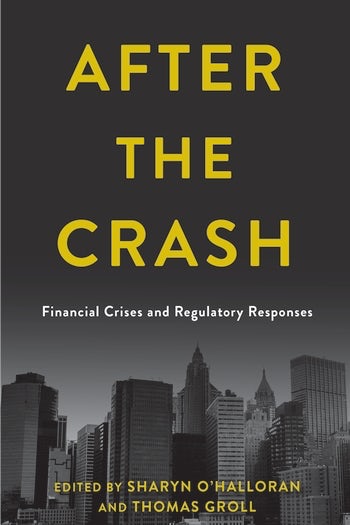 The 2008 crash was the worst financial crisis and the most severe economic downturn since the Great Depression. It triggered a complete overhaul of the global regulatory environment, ushering in a stream of new rules and laws to combat the perceived weakness of the financial system. While the global economy came back from the brink, the continuing effects of the crisis include increasing economic inequality and political polarization.

After the Crash is an innovative analysis of the crisis and its ongoing influence on the global regulatory, financial, and political landscape, with timely discussions of the key issues for our economic future. It brings together a range of experts and practitioners, including Joseph Stiglitz, a Nobel Prize winner; former congressman Barney Frank; former treasury secretary Jacob Lew; Paul Tucker, a former deputy governor of the Bank of England; and Steve Cutler, general counsel of JP Morgan Chase during the financial crisis. Each poses crucial questions: What were the origins of the crisis? How effective were international and domestic regulatory responses? Have we addressed the roots of the crisis through reform and regulation? Are our financial systems and the global economy better able to withstand another crash? After the Crash is vital reading as both a retrospective on the last crisis and an analysis of possible sources of the next one.

This fascinating compendium of essays is appropriately broad in both coverage and perspectives. Dip into this impressive smorgasbord, and you’ll find the thoughts and analyses of top academic economists, leading scholars in other fields, and public figures who both watched and influenced what happened. The financial crisis raised numerous questions; this book is a stepping-stone toward answers. Alan S. Blinder, Princeton University, and former vice chair, Federal Reserve Board

These expertly curated essays focus on the relationship between risk and liquidity, the two most important factors underpinning the global economy. This compilation is required reading for anyone wanting to understand the events leading up to the financial crisis and, more importantly, those who want to avoid the next one. Vikram Pandit, chairman and CEO, the Orogen Group

This is a first-rate book containing various perspectives on the 2008 global financial crisis. The contributors are outstanding, and the coverage of topics is well balanced. It is an important book for all those interested in the crisis and an assessment of the likelihood of another in the coming years. Franklin Allen, Imperial College London

After the Crash provides a timely, comprehensive, and insightful evaluation of the status of financial reforms after the collapse of Lehman Brothers in September 2008. The authors provide detailed assessments of reforms that have worked and those that have fallen short of their goals, drawing important lessons from the global financial crisis and its aftermath. Their analysis should be of great interest to the general public as well as academics and policy makers. Arthur Wilmarth, George Washington University

After the Crash contains a number of excellent essays that help make sense of the political economy of financial regulation in the aftermath of the 2008 financial crisis. There is a lot to learn from this volume, especially on the implementation and evolution of important reforms of the financial sector, such as Dodd-Frank. Amir Sufi, University of Chicago Booth School of Business

Foreword, by David Madigan
Preface, by Sharyn O’Halloran and Thomas Groll
1. Introduction: Overview of the Financial Crisis and Its Impacts, by Sharyn O’Halloran, Thomas Groll, and Geraldine McAllister
Part I. The Financial Crisis in Perspective
2. If “It” Happened Again: A Road Map for Regulatory Reform, by Glenn Hubbard
3. Trends and Delegation in U.S. Financial Market Regulation, by Thomas Groll, Sharyn O’Halloran, and Geraldine McAllister
4. We Did Not Repeat the Errors of the Past: Lessons Drawn from the Fed’s Policy During the Great Depression, by Antoine Parent
5. Regulation and Competition in the EU Financial Sector, by Pierre-Charles Pradier
6. Trends in Financial Market Regulation, by Nolan McCarty
Part II. Creating The Right (Dis)incentives
7. Progress and Challenges After the Financial Crisis, by Jacob J. Lew
8. Banks and Tax Havens: First Evidence Based on Country-by-Country Reporting, by Vincent Bouvatier, Gunther Capelle-Blancard, and Anne-Laure Delatte
9. “Dynamic Precaution” in Maintaining Financial Stability: The Importance of FSOC, by Jeffrey N. Gordon
Part III. Use and (Ab)Use of Models in Predicting Financial Outcomes
10. Reflections on the Global Financial Crisis Ten Years On, by Joseph E. Stiglitz
11. The Right Way to Use Models, by Emanuel Derman
12. The Fundamental Volatility of the Digital Economy as a Contributor to Financial Instability, by Eli Noam
13. The Impact of Regulation on Systemic Risk, by Sharyn O’Halloran and Nikolai Nowaczyk
14. Big Data, Process Scalability, and Financial Stability, by Mark D. Flood
Part IV. Regulating for the Next Crisis?
15. Rules Versus Principles in Financial Regulation Following the Crisis: It All Depends on the Purpose, by Paul Tucker
16. How to Regulate in Times of Crisis, by Stephen M. Cutler
17. The Economic and Political Implications of the Dodd-Frank Act, by Barney Frank
18. The Regulatory Sine Curve: What Explains the Retreat from Systemic Risk Regulation (and Why It Was Predictable), by John C. Coffee Jr.
19. Roundtable: It’s Not Too Much or Too Little Regulation; It’s Getting It Right, by John C. Coffee Jr., Stephen M. Cutler, Barney Frank, and Kathryn Judge
Part V. The Origins of the Next Financial Crisis
20. Interview: Striking the Right Balance Between Markets and Regulation, by William T. Winters Interviewed by Ailsa Roell
21. Money Market Funds After the Onset of the Crisis, by Viktoria Baklanova and Joseph Tanega
22. The 2017 Tax Act’s Potential Impact on Bank Safety and Capitalization, by Mark J. Roe and Michael Troge
23. Derivative Clearinghouses: Collateral Management and Policy Implications, by Agostino Capponi
Concluding Remarks, by Sharyn O’Halloran and Thomas Groll
Contributors
Index

Sharyn O’Halloran is the George Blumenthal Professor of Political Economy, professor of international and public affairs, and the senior vice dean and chief academic officer for the School of Professional Studies at Columbia University. Her publications include Politics, Process, and American Trade Policy (1994) and The Future of the Voting Rights Act (2006).