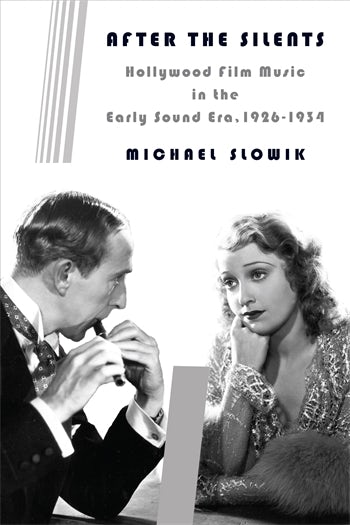 Many believe Max Steiner's score for King Kong (1933) was the first important attempt at integrating background music into sound film, but a closer look at the industry's early sound era (1926–1934) reveals a more extended and fascinating story. Viewing more than two hundred films from the period, Michael Slowik launches the first comprehensive study of a long-neglected phase in Hollywood's initial development, recasting the history of film sound and its relationship to the "Golden Age" of film music (1935–1950).

Slowik follows filmmakers' shifting combinations of sound and image, recapturing the volatility of this era and the variety of film music strategies that were tested, abandoned, and kept. He explores early film music experiments and accompaniment practices in opera, melodrama, musicals, radio, and silent films and discusses the impact of the advent of synchronized dialogue. He concludes with a reassessment of King Kong and its groundbreaking approach to film music, challenging the film's place and importance in the timeline of sound achievement.

Slowik not only sketches out the important trends and developments of this nascent period of classical film music history but also makes a compelling argument that there are important continuities that connect the mature silent period with the early sound period. Jeff Smith, author of The Sounds of Commerce: Marketing Popular Film Music

With a thorough investigation of hundreds of conversion-era feature films, Michael Slowik has provided an important revision of film music history to account for a wide range of scoring practices. After the Silents is impressive scholarship and a valuable resource for anyone with an interest in film sound. Jennifer Fleeger, author of Sounding American: Hollywood, Opera, and Jazz

Scholars interested in film music will enjoy Slowik's discussion of the differences in film scoring practices across studios and in B films versus mainstream, higher-budget films.... Recommended. Choice

Slowik offers a comprehensive and compelling analysis of the evolving and diverse musical landscape of early sound film and revises our understanding of the development of the classical Hollywood film score. Journal of American History

Michael Slowik is assistant professor of television, film, and new media at San Diego State University. His work appears in Cinema Journal; American Music; The Journal of American Culture; Journal of Popular Film and Television; Music, Sound, and the Moving Image; Nineteenth-Century Theatre and Film; and Quarterly Review of Film and Video.