The Fall and the Rise After the Event 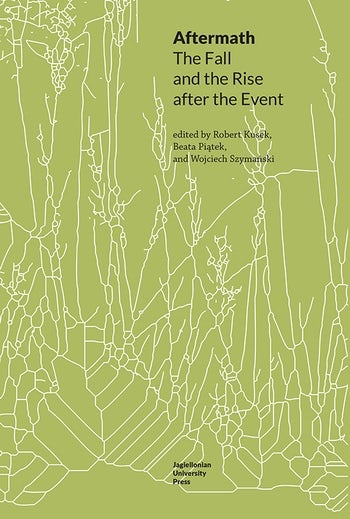 The Fall and the Rise After the Event

What happens in the wake of the event? Is the event’s aftermath always characterised by the experience of disorder, fragmentation, and impermanence? Or, alternatively, can aftermath be seen as a new growth, a second crop of grass that can be sown and reaped and which gives rise to a new integrity, a new unity? The volume’s twenty-three essays by scholars from Australia, France, Germany, India, Ireland, Luxembourg, New Zealand, Poland, Spain, and the United States re-visit the notion and representation of aftermath, understood here widely as a consequence/result/after-effect of a seminal event (to an individual, a community, society, regions or nations), and explore its transformative and life-changing characteristics. While acknowledging disastrous or catastrophic consequences of the event, Aftermath argues in favour of recognising some rejuvenating potential of its after-effects.


PART ONE: After Trauma

Dagmara Drewniak - “It Is, After All, a Communication with Ghosts” : Correspondences by Anne Michaels and Bernice Eisenstein as a Historical and Personal Elegy in the Aftermath of the Holocaust

Edyta Lorek-Jezińska - Memory of the Holocaust: Vicarious Trauma and Counter-Monuments in The Hideout by NeTTheatre

Magdalena Zolkos - “After You Died I Could Not Hold a Funeral, and so My Life Became a Funeral”: Catastrophic Aftermaths in Han Kang’s Human Acts
Héloïse Lecomte - “Phantom Growth”: Post-Traumatic Healing in Ian McEwan’s The Child in Time (1987) and Julian Farino’s T.V. Adaptation (2017)


PART TWO: The End of the Wor(l)d and After

Katarzyna Więckowska - The End of the World and After

Mantra Mukim - After Naming: Rilke’s Namenlos, Kant, and the Subject of Aesthetics

Douglas Klahr - The Precursor to Virtual Reality Documents Architectural Hell: A Stereoscopic View of the Crematorium at Dachau

Grace Pundyk - The Promise of a Hospitable Memory: Encounters on the Threshold

Amanda Wasielewski - “We Have Decided Not to Decide”: The End of History and the Punk Politics of De Reagering

Karolina Kolenda - After Nature: Landscape, Art, and Design in the Aftermath of Katrina and Sandy

Glenn Loughran - Evental Research… After the Future of Work


PART FOUR: Colonialism and Its Aftermath

Claudia Marquis - Colonialism and Its Aftermath in The Lord of the Rings: Postcolonial Reflections on Tolkien’s Imperial Fantasy
Paulina Grzęda - The Entangled Temporality of the Postcolony: Zakes Mda and the “Chaffing Temporalities” of Post-Apartheid

Marie-Anne Hansen-Pauly - Language and Disaster: “The Gulf (Between You and Me)” by Pierre Joris

Michaela Beck - The Post-Postmodern Afterlife of the American Novel: “Resurrecting” the Novel-as-Archive in Anne Valente’s Our Hearts Will Burn Us Down (2016) and Ed Park’s Personal Days (2008)

Tomasz Fisiak - Grande Dame Guignol and the Notion of the Aftermath: A Case Study of Robert Aldrich’s Hush…Hush, Sweet Charlotte (1964)


Author index
About the authors

Robert Kusek, is an Assistant Professor in the Department of Comparative Studies in Literature and Culture at the Institute of English Studies, Jagiellonian University in Kraków. His research interests include life writing genres, the contemporary novel in English, poetics of memory and loss, as well as a comparative approach to literary studies. He is the author of two monographs, including Through the Looking Glass: Writers’ Memoirs at the Turn of the 21st Century (2017), and several dozen articles published in books, academic journals, and magazines, as well as co-editor of ten volumes of articles, most notably Travelling Texts: J.M. Coetzee and Other Writers (2014). He also works at the Research Institute of European Heritage at the International Cultural Centre in Kraków.

Beata Piątek is an Assistant Professor in the Department of Comparative Literature and Culture at the Institute of English Studies, Jagiellonian University in Kraków. Her academic interests include the influence of memory on identity, collective and cultural memory, and literature as an instrument of cultural memory with particular emphasis on the question of trauma and its representation in literature and culture. She is the author of History, Memory, Trauma in Contemporary British and Irish Fiction (2014) and articles on contemporary British and Irish literature and culture. She is also working in the areas of posthumanism and animal studies.

Wojciech Szymański Wojciech Szymański is an Assistant Professor at the Department of the History of Modern Art and Culture at the Institute of Art History, University of Warsaw. He is an independent curator and art critic; member of the International Association of Art Critics (AICA), author of the book Argonauci. Postminimalizm i sztuka po nowoczesności: Eva Hesse, Felix Gonzalez-Torres, Roni Horn, Derek Jarman [The Argonauts. Postminimalism and Art after Modernism: Eva Hesse, Felix Gonzalez-Torres, Roni Horn, Derek Jarman] (2015), and numerous academic and critical texts; curator of group and solo shows and art projects. His current research focuses on visual memory of the Great War. He is a member of CRUSEV (Cruising the 1970s: Unearthing Pre-HIV/AIDS Queer Sexual Cultures) research team in the framework of HERA Grants.