Against a Hindu God

Buddhist Philosophy of Religion in India 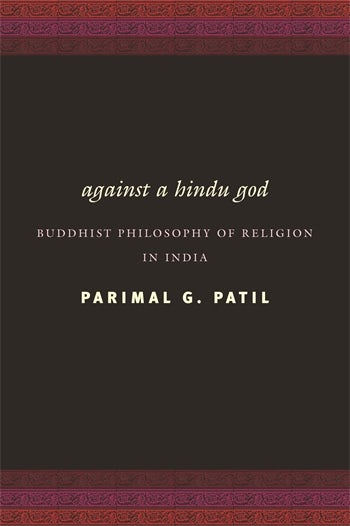 Against a Hindu God

Buddhist Philosophy of Religion in India

Philosophical arguments for and against the existence of God have been crucial to Euro-American and South Asian philosophers for over a millennium. Critical to the history of philosophy in India, were the centuries-long arguments between Buddhist and Hindu philosophers about the existence of a God-like being called Isvara and the religious epistemology used to support them. By focusing on the work of Ratnakirti, one of the last great Buddhist philosophers of India, and his arguments against his Hindu opponents, Parimal G. Patil illuminates South Asian intellectual practices and the nature of philosophy during the final phase of Buddhism in India.

Based at the famous university of Vikramasila, Ratnakirti brought the full range of Buddhist philosophical resources to bear on his critique of his Hindu opponents' cosmological/design argument. At stake in his critique was nothing less than the nature of inferential reasoning, the metaphysics of epistemology, and the relevance of philosophy to the practice of religion. In developing a proper comparative approach to the philosophy of religion, Patil transcends the disciplinary boundaries of religious studies, philosophy, and South Asian studies and applies the remarkable work of philosophers like Ratnakirti to contemporary issues in philosophy and religion.

" Against a Hindu God is a book about the late Indian critiques of Brahmanical conceptions of God. But more than just a study of Buddhist philosophers like Ratnakirti, Parimal G. Patil is interested in what late medieval Indian philosophers have to say to the disciplines of philosophy, theology, religious studies, and South Asian studies. Utilizing the concepts and vocabulary of Sanskrit grammatical theory, Patil constructs a trans-disciplinary space for the comparative philosophy of religion, a vision of the discipline that is both creative and compelling. Scholars routinely note that Buddhist logical and epistemological theories exist in the service of a religious agenda, but few have explained the soteriological dimensions of Buddhist philosophy as clearly as Patil does in this work. A major contribution to the fields of Buddhist and comparative philosophy." -- Jose Ignacio Cabezon, University of California at Santa Barbara

...an inviting introduction to the central concerns of Indian forms of logic and to some of its most excellent epistemology, Patrick McAllister, Journal of Hindu Studies

This is a brilliant, erudite, formidable, and intricately argued first book, which shows the arrival of an outstanding Indologist and philosopher. The book calls for concentration and an eye for detail, but it amply rewards the reader. Chakravarthi Ram-Prasad, Philosophy East and West

Patil sets a high standard for comparative philosophy. In addition, the work provides a compelling, new interpretation of the place of philosophy on the Buddhist path to liberation. Jonathan C. Gold, International Journal of Hindu Studies