Thirty-Four Short Plays for Children and Everyone Else

Alain Badiou. Translated and with an Introduction by Joseph Litvak 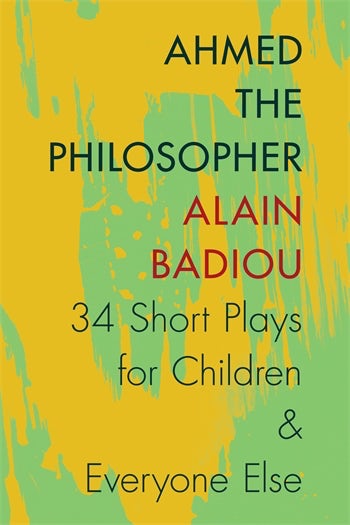 Thirty-Four Short Plays for Children and Everyone Else

Alain Badiou. Translated and with an Introduction by Joseph Litvak

English-speaking readers might be surprised to learn that Alain Badiou writes fiction and plays along with his philosophical works and that they are just as important to understanding his larger intellectual project. In Ahmed the Philosopher, Badiou's most entertaining and accessible play, translated into English here for the first time, readers are introduced to Badiou's philosophy through a theatrical tour de force that has met with much success in France.

Ahmed the Philosopher presents its comic hero, the "treacherous servant" Ahmed, as a seductively trenchant philosopher even as it casts philosophy itself as a comic performance. The comedy unfolds as a series of lessons, with each "short play" or sketch illuminating a different Badiousian concept. Yet Ahmed does more than illustrate philosophical abstractions; he embodies and vivifies the theatrical and performative aspects of philosophy, mobilizing a comic energy that exposes the emptiness and pomp of the world. Through his example, the audience is moved to a living engagement with philosophy, discovering in it the power to break through the limits of everyday life.

This is a terrific translation of an intriguing play. In it, Badiou translates the most fundamental elements of his philosophy, including his critique of multiculturalism, his theory of the event, and his ruminations on love, into a vivid, dramatic form. The text makes an excellent introduction to Badiou. Martin Puchner, author of The Drama of Ideas: Platonic Provocations in Theater and Philosophy

Joseph Litvak's translation of Ahmed the Philosopher is smart, eloquent, and truly a delight to read. The play is a timely work, addressing questions of great political and social seriousness and contemporary relevance with an ironic yet never bitter eye. Kenneth Reinhard, director, UCLA Program in Experimental Critical Theory

With Alain Badiou's acclaimed Ahmed the Philosopher now available in this expert English translation, a new public will discover what many in the Francophone world already knew: Badiou, premier theorist of the politics of the subject and the logics of worlds, is also a brilliant playwright! A 'red' Molière by way of Aristophanes who has invented an experimental language that combines slang and philosophical concepts in a new theatrical idiom. Emily Apter, New York University

An outline of philosophy as a series of commedia dell'arte lazzi, Badiou audaciously stages his thought under the theatrical cover of the improvisations of Ahmed, a philosopher, punster, and thinker from the banlieux of Paris. These skits – slapstick, profound, scatological – insist on the political significance of Badiou's thought even at its most abstract. Joseph Litvak deftly translates these Brechtian fables into an American idiom without surrendering the peculiarities of the French context to which, as Litvak's excellent introduction and notes suggest, they very much belong. Richly stage-worthy, intellectually provocative, and at times as funny as Harry Frankfurt – really the only comparison among contemporary philosophers who comes to mind – this volume is also perhaps the best introduction to Badiou's thought available in English. Martin Harries, University of California, Irvine, author of Forgetting Lot's Wife

Badiou's plays offer the Anglophone world not only theatrical opportunities to produce Badiou's work in English, but also — and this is especially the case for Ahmed the Philosopher — provocative pedagogical tools for bringing an experiment in 'philosophical joy' into the university classroom. Ethan Philbrick, TDR: The Drama Review

Read an excerpt from Ahmed the Philosopher

Alain Badiou (PhD, Philosophy, Ecole Normale Superieure) holds the Rene Descartes Chair at the European Graduate School; he also teaches at the Ecole Normale Superieure and the College International de Philosophie in Paris. He is the author of several successful novels and plays as well as more than a dozen philosophical works, including his masterwork, Being and Event (Continuum, 2007), and several Columbia titles, includng Plato's Republic (2013) and Jacques Lacan Past and Present (2016).