Fernando Reinares. With a Foreword by Bruce Riedel 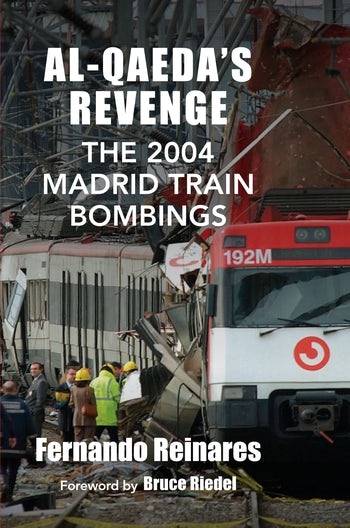 Fernando Reinares. With a Foreword by Bruce Riedel

In Al-Qaeda's Revenge: The 2004 Madrid Train Bombings, Fernando Reinares tells the story of "3/11" - the March 11, 2004, bombings of commuter trains in Madrid, which killed 191 people and injured more than 1,800. He examines the development of an al-Qaeda conspiracy in Spain from the 1990s through the formation of the 3/11 bombing network beginning in March 2002, and discusses the preparations for and fallout from the attacks. Reinares draws on judicial, police, and intelligence documents to which he had privileged access, as well as on personal interviews with officials in Spain and elsewhere. His full analysis links the Madrid bombings to al-Qaeda's senior leadership and unveils connections between 3/11 and 9/11.

Al-Qaeda's Revenge, Spain's counterpart to The 9/11 Commission Report, was a bestseller in Spain.

Fernando Reinares likely has written the definitive book on the origins of March 11. El Pais

The most clear-headed and well-documented book on March 11. El Mundo

Al-Qaeda's Revenge is one of the most important books written on the subject of radical Islamic terrorism in Europe and North America since 9/11. No other book has taken such an in-depth look at the way a plot was conceived and how a conspiracy of plotters came together to execute their plan. This kind of patient reconstruction of a terror attack is a model for intelligence and security services around the world to emulate to better understand the challenges they face. from the foreword by Bruce Riedel, director of the Intelligence Project, Brookings Institution

This book will help educate experts and nonexperts about the operational methods of terrorist organizations. In particular it establishes parallels and comparisons with the September 11 attacks and the July 2005 London attacks. Luis Bitencourt, National Defense University

An impressive piece of research, the implications of which stretch well beyond a single event more than a dozen years ago. The Economist

Al-Qaeda’s Revenge is a thoroughly researched and well-presented case study on the evolution of the 3/11 network. Small Wars Journal

This is a must-read for counterterrorism authorities and concerned citizens alike. Foreign Affairs

Helps[s] to cast a clearer light on the past and its links to the present, and how persistent and dangerous the terrorist threat that we face from violent Islamic groups, and Al-Qaeda in particular, remains. Rusi Journal

Authoritative....Reinares brings his formidable investigative skills to prove that the 3–11 attacks were not the work of home-grown extremists enraged by Spanish involvement in the Iraq war. Terrorism and Political Violence

High marks for the depth of research, the quality of analysis, and the accuracy of its often complex results. Intelligence Analysis and Reporting

The book by Prof. Reinares constitutes the definitive work on the 11 March bombings. Terrorism and Political Violence

List of Maps and Figures
Acknowledgments
Foreword, by Bruce Riedel
List of Abbreviations
Prologue
Part I. The 3/11 Terrorist Network: Origins, Components, and Formation
1. Osama bin Laden's Man in Spain and His Associates
2. From Abu Dahdah's Cell to the 3/11 Network
3. "He swore that the Spanish would pay dearly for his detention": Allekema Lamari and Algerians in the 3/11 Network
4. The Moroccan Islamic Combatant Group and Its Involvement in the 3/11 Network
5. "They moved together while I moved on my own": Mohamed al-Masri in Egypt, Spain, and Italy
6. Common Delinquents Turned into Jihadists: The Final Component of the 3/11 Network
7. How the 3/11 Terrorist Network Formed
Part II. The Al-Qaeda Connection: Revenge, Opportunity, and Strategy
8. "Transforming the tranquillity of the crusaders into a hell": Amer Azizi and the Al-Qaeda Link to 3/11
9. A Meeting in Karachi: Making the Decision to Attack Spain
10. Amer Azizi and the 3/11 Network
11. "Free our prisoners and leave our lands": The 3/11 Attacks and Al-Qaeda's General Strategy
12. "I invoke Allah and ask him to facilitate my martyrdom": Other Facets of the 3/11 Attacks
13. Fleeing to Join Al-Qaeda's Mesopotamian Branch: The Fugitives of the 3/11 Network
14. After the 2004 Madrid Train Bombings: The Fallout in Spain
Notes
Sources and Bibliography
Index

Fernando Reinares is director of the Program on Global Terrorism at the Elcano Royal Institute, as well as professor of political science and security studies at Universidad Rey Juan Carlos, both in Madrid. He coedited, with Bruce Hoffman, The Evolution of the Global Terrorist Threat: From 9/11 to Osama bin Laden's Death (Columbia, 2014). He is a Global Fellow of the Wilson Center, where he was a Public Policy Scholar in 2011, and he is also an adjunct professor at Georgetown University and American University in Washington.