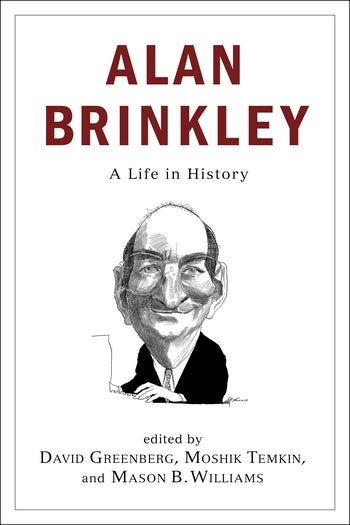 Few American historians of his generation have had as much influence in both the academic and popular realms as Alan Brinkley. His debut work, the National Book Award–winning Voices of Protest, launched a storied career that considered the full spectrum of American political life. His books give serious and original treatments of populist dissent, the role of mass media, the struggles of liberalism and conservatism, and the powers and limits of the presidency. A longtime professor at Harvard University and Columbia University, Brinkley has shaped the field of U.S. history for generations of students through his textbooks and his mentorship of some of today’s foremost historians.

Alan Brinkley: A Life in History brings together essays on his major works and ideas, as well as personal reminiscences from leading historians and thinkers beyond the academy whom Brinkley collaborated with, befriended, and influenced. Among the luminaries in this volume are the critic Frank Rich, the journalists Jonathan Alter and Nicholas Lemann, the biographer A. Scott Berg, and the historians Eric Foner and Lizabeth Cohen. Together, the seventeen essays that form this book chronicle the life and thought of a working historian, the development of historical scholarship in our time, and the role that history plays in our public life. At a moment when Americans are pondering the plight of their democracy, this volume offers a timely overview of a consummate student—and teacher—of the American political tradition.

A marvelous and moving tribute to a historian who changed our understanding of political history and of the twentieth century. The book is testimony to the way he touched so many minds and hearts. Drew Gilpin Faust, Harvard University

A beautiful tribute to one of the great historians of our time. His students and friends offer powerful essays about how Columbia’s Alan Brinkley profoundly influenced the field of American political history and how that field can help us understand the political struggles of the twentieth century. Julian E. Zelizer, Princeton University

Alan Brinkley: A Life in History is full of personal insight and historical perspective. The essays and reflections don't just bring to life a man of remarkable talent and extraordinary modesty, but reveal how the field of political history has evolved over the past four decades. Scholarly yet accessible, it will be of interest to both historians and general readers. A wonderful book. Steven Gillon, University of Oklahoma

This superb volume offers readers a deeply revealing portrait of Alan Brinkley, the leading modern American political historian of his generation. In sparkling prose, his students, colleagues, friends, and family explore Brinkley's brilliant perspective on the history of our times, illuminating the man and the nation to which he has devoted his life's work. Ellen Fitzpatrick, University of New Hampshire

It is a rare pleasure to read this collection of essays on Alan Brinkley and his work. The authors and editors have done a wonderful service to all of us who study American history, with a book that affords its readers the chance not only to marvel at Brinkley’s remarkable mind and incomparably decent character but also to consider what sort of person becomes a great historian. Eric Rauchway, University of California, Davis

The contributors to this volume carefully and thoroughly treat the totality of Brinkley's career - and in the process, render a valuable contribution to understanding the historiography of American political history. Society for U.S. Intellectual History Blog

This celebration of Brinkley allows the layman to appreciate the man and the academic, but it is recommended for serious scholars of US history. Choice

Acknowledgments
Foreword: A Career in Full, by Eric Foner
Part I. A Historian’s Work
1. A Personal History, by Elly Brinkley
2. The “Dissident Ideology” Revisited: Populism and Prescience in Voices of Protest, by Moshik Temkin
3. The End of Reform: A Reconsideration, by Mason B. Williams
4. After Reform: The Odyssey of American Liberalism in Liberalism and Its Discontents, by David Greenberg
5. Objectivity and Its Discontents: Reflections on The Publisher, by Nicole Hemmer
6. The Liberal’s Imagination: “The Problem of American Conservatism” Then and Now, by Jefferson Decker
7. Alan Brinkley and the Revival of Political History, by Matthew Dallek
8. Houdini, Hip-Hop, and Dystopian Literature: Alan Brinkley’s Patterns of Culture, by Sharon Ann Musher
9. The View from the Classroom, by Michael W. Flamm
10. A Historian and His Publics, by Nicholas Lemann
Part II. Reminiscences
11. The Lost Masterpiece, by A. Scott Berg
12. The Skinny One with Glasses and Receding Hairline, by Nancy Weiss Malkiel
13. Lord Root-of-the-Matter, by Jonathan Alter
14. Careers in Counterpoint, by Lizabeth Cohen
15. History as a Humanizing Art, by Ira Katznelson
16. Two Kids from Chevy Chase, by Frank Rich
Appendix: Transcript of C-SPAN’s Booknotes: An Interview Between Host Brian Lamb and Alan Brinkley, August 31, 1993
Notes
Contributors
Index

David Greenberg, a historian of American politics, teaches at Rutgers University. His latest book is Republic of Spin: An Inside History of the American Presidency (2016).

Moshik Temkin is associate professor of history and public policy at the Harvard Kennedy School and the author of The Sacco-Vanzetti Affair: America on Trial (2011).

Mason B. Williams is assistant professor of leadership studies and political science at Williams College and the author of City of Ambition: FDR, La Guardia, and the Making of Modern New York (2013).