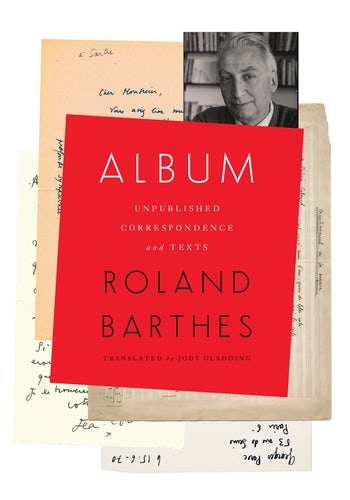 Album provides an unparalleled look into Roland Barthes's life of letters. It presents a selection of correspondence, from his adolescence in the 1930s through the height of his career and up to the last years of his life, covering such topics as friendships, intellectual adventures, politics, and aesthetics. It offers an intimate look at Barthes's thought processes and the everyday reflection behind the composition of his works, as well as a rich archive of epistolary friendships, spanning half a century, among the leading intellectuals of the day.

Barthes was one of the great observers of language and culture, and Album shows him in his element, immersed in heady French intellectual culture and the daily struggles to maintain a writing life. Barthes's correspondents include Maurice Blanchot, Michel Butor, Jacques Derrida, Michel Foucault, Julia Kristeva, Claude Lévi-Strauss, Georges Perec, Raymond Queneau, Alain Robbe-Grillet, Marthe Robert, and Jean Starobinski, among others. The book also features documents, letters, and postcards reproduced in facsimile; unpublished material; and notes and transcripts from his seminars. The first English-language publication of Barthes's letters, Album is a comprehensive testimony to one of the most influential critics and philosophers of the twentieth century and the world of letters in which he lived and breathed.

The significance of this book—the first English-language publication of Barthes's correspondence—cannot be overestimated. Starting with Barthes's adolescence and the years in his late twenties spent in a sanatorium, these selected letters represent exchanges with longtime personal friends as well as many of the key figures of twentieth-century French intellectual history. Diana Knight, University of Nottingham

[Album] offers charming insights into the famous literary critic’s development as a writer and thinker. . . . This new glimpse into a celebrated career will be rewarding to Barthes scholars. Publishers Weekly

This wonderful book locates the elusive Roland Barthes—the very notion hints at its impossibility—in his various worlds: in the sanatorium, in literary and academic Paris, in the long escapade of structuralism and after. It succeeds in this attempt not by trying to define him but by allowing him to place himself among his friends and his books, among his colleagues and his projects. One of his dreams, he said, was ‘to disappear and still be close by.’ Here we begin to see how he managed to do just that. Michael Wood, Princeton University

Roland Barthes was my friend since 1957, though I’ve never had a friend whose offering exacted so little from anyone and so richly fulfilled the rewards of our intimacy—except for the pleasure of Roland’s texts, that are now beyond mourning.
Roland arranged to take his mother and me from Paris to New York in the mid 1960s—her first visit since 1904 and her first air travel to the newly named Kennedy Airport, landing on top of a city Madame Barthes could never have imagined from her first encounter with it, and from then on everything was all pleasure. Moreover my discovery that his mother did not read his texts, and that Roland did not expect her to, eased some family tensions of my own.
Roland was faithful to what Walter Pater, whom he had never heard of, calls “the administration of the visible”, for Roland adored the physical world: “Desire still irritates the non-will-to-possess by this perilous movement. I love you in my head, but imprison you behind my lips. I do not divulge. I speak silently to who is not yet or is no longer the other: I keep myself from loving you.” (A Lover’s Discourse.)
The accents are those of Socrates, the first—as Roland was the latest—Docent of Desire. In his last letter, before he was run down by that laundry-truck: “Since Maman’s death there has been a scission in my life, in my psyche, and I have less courage to undertake things. Don’t hold it against me. Ne m’en veuille pas.” Richard Howard, Columbia University

Album offers valuable insight, not only into the particulars of Barthes’s life, but also into the themes that haunted his writing, making it a worthwhile resource for Barthes scholars and ordinary readers alike. Ayten Tartici, Los Angeles Review of Books

The letters and manuscripts in this volume help the reader to understand not only the kinds of relationships that Barthes had, but also their nature. Nicholas P. Greco, ASAP/J

This publication underscores his contribution to 21st century French intellectual culture and his impact on literary studies. Choice

The paradigmatic French intellectual, up close and intimate. Michael Dirda, The Washington Post

It does not propose to tell a story, but picks out moments, connections, elements of a life, and this is its contribution, methodological as much as it is informational, to Barthes studies. Callie Gardner, H-France

Rich in insights into Barthes's career, especially that of its ultimate phase. American Book Review

Foreword, by Éric Marty
Death of the Father
Encounter in the English Channel on the Night of October 26–27, 1916, Between German Destroyers and the Trawler Le Montaigne
Acknowledgments
Note
Chronology
1. From Adolescence to the Romance of the Sanatorium: 1932–46
2. The First Barthes
3. The Great Ties
4. A Few Letters Regarding a Few Books
5. Exchanges
Notes
Index

Roland Barthes (1915–1980) was a French literary theorist, philosopher, critic, and semiotician. His works include Mythologies, S/Z, A Lover's Discourse, and Camera Lucida. Barthes's final seminars, The Neutral: Lecture Course at the Collège de France (1977–1978) (2005); The Preparation of the Novel: Lecture Courses and Seminars at the Collège de France (1978–1979 and 1979–1980) (2010); and How to Live Together: Novelistic Simulations of Some Everyday Spaces (2012), are also published by Columbia University Press.

Jody Gladding is a poet and author most recently of Translations from Bark Beetle. She has translated thirty works from French, for which she has received grants from the Centre National du Livre and the French-American Foundation Translation Prize.