Buddhism and Psychedelic Spirituality in America 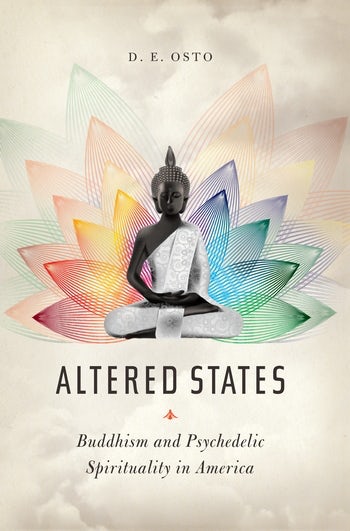 Buddhism and Psychedelic Spirituality in America

In the 1960s, Americans combined psychedelics with Buddhist meditation to achieve direct experience through altered states of consciousness. As some practitioners became more committed to Buddhism, they abandoned the use of psychedelics in favor of stricter mental discipline, but others carried on with the experiment, advancing a fascinating alchemy called psychedelic Buddhism.

Many think exploration with psychedelics in Buddhism faded with the revolutionary spirit of the sixties, but the underground practice has evolved into a brand of religiosity as eclectic and challenging as the era that created it. Altered States combines interviews with well-known figures in American Buddhism and psychedelic spirituality—including Lama Surya Das, Erik Davis, Allan Badiner, Geoffrey Shugen Arnold Sensei, Rick Strassman, and Charles Tart—and personal stories of everyday practitioners to define a distinctly American religious phenomenon. The nuanced perspective that emerges, grounded in a detailed history of psychedelic religious experience, adds critical depth to debates over the controlled use of psychedelics and drug-induced mysticism. The book also opens new paths of inquiry into such issues as re-enchantment, the limits of rationality, the biochemical and psychosocial basis of altered states of consciousness, and the nature of subjectivity.

Altered States genuinely moves forward in laying a path for new, insightful, and valuable information on the American Buddhism that is developing in our global society. Douglas Osto's groundbreaking research will be appreciated by scholars, and his accessible style will be enjoyed by nonacademic readers. Charles Prebish, author of Luminous Passage: The Practice and Study of Buddhism in America

Altered States deftly guides us through the neglected territory of psychedelic Buddhism. This is a fascinating story, full of vivid characters and supported by solid research. Still, I believe it makes a greater contribution by situating these practices and persons within the larger contexts of tantra, of American religion, and of cutting-edge neuropsychology and consciousness studies. The result is—to use le mot juste—mind blowing. Franz Metcalf, author of What Would Buddha Do?: 101 Answers to Life's Daily Dilemmas

"[Altered States] mixes statistics and surveys, historical overview, personal experience, and ethnographic texture to uncover the intertwining history of two fast-growing movements in American spirituality.... This overview will appeal to anyone interested in Buddhism, psychedelic possibilities, and understanding how both are forging a controversial new American religious experience. Publishers Weekly

Osto’s book is exceptional in its ability to focus the conversation about entheogens within religious perspectives. . . . He also points to more complex questions regarding the nature of subjectivity, experience, and scientific study. Religious Theory

Of interest to anyone who wants to explore the intersection between traditional religion and altered states of consciousness, be they induced by psychedelics or any other means. OPEN

Provocative.... The book is worth buying, reading, and quoting. PsycCritiques

Douglas Osto is senior lecturer in philosophy and Asian studies and program coordinator of the Asian studies program in the School of Humanities at Massey University. He is the author of Power, Wealth, and Women in Indian Mahayana Buddhism and has published articles in the Journal of Indian Philosophy, Journal of Religious History, Buddhist Studies Review, and the New Zealand Journal of Asian Studies.