Fear and Conspiracy on the Edge of Empire 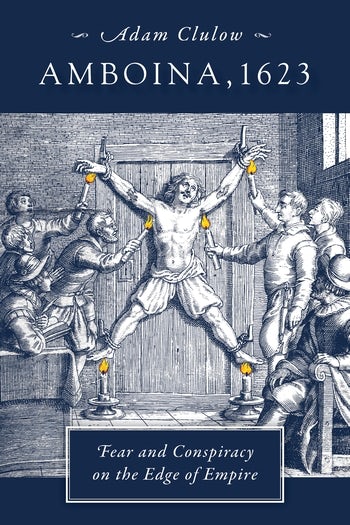 Fear and Conspiracy on the Edge of Empire

In 1623, a Japanese mercenary called Shichizō was arrested for asking suspicious questions about the defenses of a Dutch East India Company fort on Amboina, a remote set of islands in what is now eastern Indonesia. When he failed to provide an adequate explanation, he was tortured until he confessed that he had joined a plot orchestrated by a group of English merchants based nearby to seize control of the fortification and ultimately to rip the spice-rich islands from the Company’s grasp. Two weeks later, Dutch authorities executed twenty-one alleged conspirators, sparking immediate outrage and a controversy that would endure for centuries to come.

In this landmark study, Adam Clulow presents a new perspective on the Amboina case that aims to move beyond the standard debate over the guilt or innocence of the supposed plotters. Instead, Amboina, 1623 argues that the case was driven forward by a potent combination of genuine crisis and overpowering fear that propelled the rapid escalation from suspicion to torture, that gave shape and form to an imagined plot, and that pushed events forward to their final bloody conclusion. Based on an exhaustive analysis of original trial documents, letters, and depositions, this book offers a masterful reinterpretation of a trial that has divided opinion for centuries while presenting new insight into global history and the nature of European expansion across the early modern world.

In a gripping story about fear and loathing in Amboina, Adam Clulow probes a pivotal event in world history to offer fresh insights about the entanglements of European empires in Asia. Meticulously researched and engagingly told, Amboina, 1623 is that rarest of rare things: a scholarly tour de force that is also a page-turner. Lauren Benton, Vanderbilt University

A true model of globally minded historical scholarship, Clulow’s brilliant new study combines insights derived from his cutting-edge work in the digital humanities with the best traditions of archival research and interpretation. Carefully exploring the Asian context in which the dramatic events of the Amboina trial unfolded, he offers a stunning portrait of the violence, ambition, and anxiety at the heart of European empire. Daniel Botsman, Yale University

Although one hesitates to use the word ‘definitive’ in connection with the Amboina massacre, which has caused fierce controversy until the present day, Clulow’s analysis of the voluminous documentation generated by the Dutch and English East India Companies is incisive, balanced, and utterly convincing. Martine Julia van Ittersum, author of Profit and Principle: Hugo Grotius, Natural Rights Theories and the Rise of Dutch Power in the East Indies, 1595–1615

List of Illustrations
Note to the Reader
Acknowledgments
Maps of Southeast Asia, Amboina, and the Banda Islands
Introduction: The Company and the Colony
Part I. Amboina in 1623
1. With Treaty or With Violence
2. We Cannot Exist Well Without Slaves
3. Dangerous and Difficult to Govern
4. The English Serpent
5. The Trial
Part II. Remaking a Conspiracy Trial
6. The War of the Witnesses
7. Compensation and Calamity
Epilogue: The Fearful Empire
Notes
Bibliography
Index

Adam Clulow is an associate professor at Monash University. He is the author of the prize-winning The Company and the Shogun: The Dutch Encounter with Tokugawa Japan (Columbia, 2014) and the creator of the Amboyna Conspiracy Trial website, which won the New South Wales Premier’s Digital History Prize.