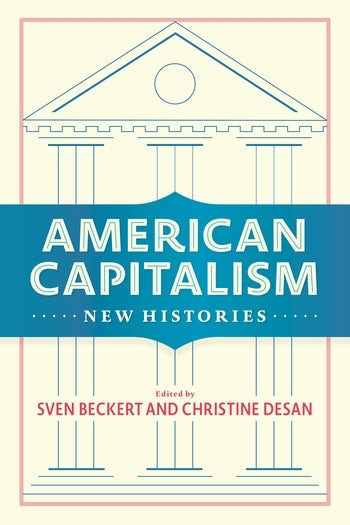 The United States has long epitomized capitalism. From its enterprising shopkeepers, wildcat banks, violent slave plantations, huge industrial working class, and raucous commodities trade to its world-spanning multinationals, its massive factories, and the centripetal power of New York in the world of finance, America has come to symbolize capitalism for two centuries and more. But an understanding of the history of American capitalism is as elusive as it is urgent. What does it mean to make capitalism a subject of historical inquiry? What is its potential across multiple disciplines, alongside different methodologies, and in a range of geographic and chronological settings? And how does a focus on capitalism change our understanding of American history?

American Capitalism presents a sampling of cutting-edge research from prominent scholars. These broad-minded and rigorous essays venture new angles on finance, debt, and credit; women’s rights; slavery and political economy; the racialization of capitalism; labor beyond industrial wage workers; and the production of knowledge, including the idea of the economy, among other topics. Together, the essays suggest emerging themes in the field: a fascination with capitalism as it is made by political authority, how it is claimed and contested by participants, how it spreads across the globe, and how it can be reconceptualized without being universalized. A major statement for a wide-open field, this book demonstrates the breadth and scope of the work that the history of capitalism can provoke.

Sven Beckert and Christine Desan are leaders in the burgeoning history of capitalism field, and they have put together a volume of outstanding scholars whose essays, in their chronological reach and subject matter, show this new literature at its best. A very fine and promising collection. Steven Hahn, New York University

American Capitalism represents the coming of age of a field of historical research. Rarely, in any field, has one volume featured the work of so many talented and accomplished historians. Each chapter breaks fresh ground and proposes new lines of inquiry. The editors have assembled a landmark and agenda-setting book that no student of economic life in the United States can afford to ignore. Jonathan Levy, University of Chicago

From the creditor constitution to the market for slave clothing to early American mercantilist thinking, this deftly curated book samples some of the best work that the history of capitalism literature has to offer. Readers interested in new and provocative explorations of the politics, law, and culture enmeshed in American economic institutions need look no further. Suresh Naidu, Columbia University

Few historical subfields are more important and timely than the critical history of capitalism. In this volume, Sven Beckert and Christine Desan have assembled cutting-edge work on topics as diverse as slavery, credit, insurance and risk, financial crises, race, gender, agriculture, and law and regulation. These essays combine chronological breadth, analytical depth, and geographic scope, linking the micro and macro, the local and the global. Essential reading. Thomas J. Sugrue, New York University

Sven Beckert is Laird Bell Professor of History and cofounder of the Program on the Study of Capitalism at Harvard University. He is the author of Empire of Cotton: A Global History (2014).

Christine Desan is Leo Gottlieb Professor of Law and cofounder of the Program on the Study of Capitalism at Harvard University. She is the author of Making Money: Coin, Currency, and the Coming of Capitalism (2014).