Samuel "Roxy" Rothafel and the Birth of the Entertainment Industry, 1908–1935 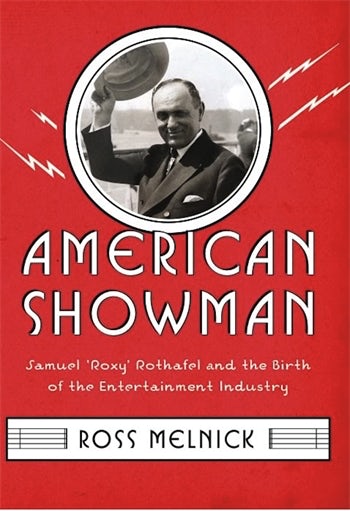 Samuel "Roxy" Rothafel and the Birth of the Entertainment Industry, 1908–1935

The producers and promoters of distinct themes and styles, showmen like Roxy profoundly remade the moviegoing experience, turning the deluxe motion picture theater into a venue for exhibiting and producing live and recorded entertainment. Roxy's interest in media convergence also reflects a larger moment in which the entertainment industry began to create brands and franchises, exploit them through content release "events," and give rise to feature films, soundtracks, broadcasts, live performances, and related consumer products. Regularly cited as one of the twelve most important figures in the film and radio industries, Roxy was instrumental to the development of film exhibition and commercial broadcasting, musical accompaniment, and a new, convergent entertainment industry.

[An] eye-poppingly informative new book.... To paraphrase Frank Loesser's 'Guys and Dolls,' with the publication of American Showman, the question 'What's playing at the Roxy?' can now be answered: 'First-rate cultural history.' Mindy Aloff, Washington Post

A penetrating, exhaustive contextualized study of Roxy's crucial role in every aspect of the early film industry...highly recommended. Choice

American Showman is a fascinating, passionate, and definitive biography of Samuel 'Roxy' Rothafel.... Melnick unveils aspects of Rothafel's career that change our understanding of American film history from the late 1910s to the early 1930s. Charles Musser, Journal of American History

For anyone interested in the historical transition from the Nickelodeon era to the classical Hollywood cinema, Ross Melnick's American Showman is a must read. Jan-Christopher Horak, UCLA Film & Television Archive

Roxy?'s extraordinary life, as Melnick illustrates, serves as a powerful lens through which to examine a dynamic age of cultural change in American life. Josh Glick, Business History Review

Anyone who cares about the development of film exhibition in the early 20th century should consider it essential reading... even a casual film buff will find much to enjoy... the book is well written and not overly burdened with jargon. Leonard Maltin, Indiewire

With so many greatly exaggerated reports of the death of cinema abroad, what a pleasure to read Ross Melnick's scrupulously researched, exhaustive biography of movie-palace impresario Samuel 'Roxy' Rothafel -- a biography that doubles as a cultural history, looking to a moment when the movies were the upstarts, making vaudeville and live theatre quake in their boots. Nick Pinkerton, Sight & Sound

Ross Melnick is assistant professor of film and media studies at the University of California, Santa Barbara. He received his Ph.D. in cinema and media studies from the University of California, Los Angeles, and a postdoctoral fellowship from Emory University. He has worked as a curator at the Museum of the Moving Image and in marketing for Loews Cineplex, Miramax, Metro-Goldwyn-Mayer, and DreamWorks, and in film distribution for Sony Pictures. With Andreas Fuchs, he is the coauthor of Cinema Treasures.