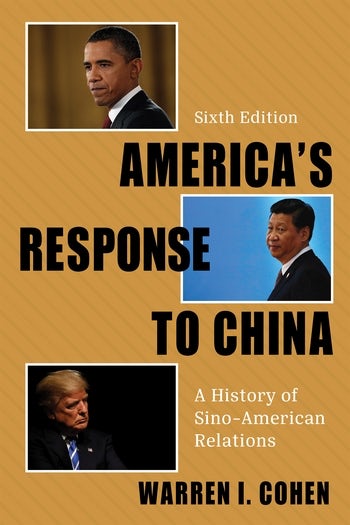 America’s Response to China has long been the standard resource for a succinct, historically grounded assessment of an increasingly complicated relationship. Written by one of America’s leading diplomatic historians, this book analyzes the concerns and conceptions that have shaped U.S.–China policy and examines their far-reaching outcomes. Warren I. Cohen begins with the mercantile interests of the newly independent American colonies and discusses subsequent events up to 2018. For this sixth edition, Cohen adds an analysis of the policies of Barack Obama and extends his discussion of the Chinese–American relationship in the age of potential Chinese ascendance and the shrinking global influence of the United States, including the complications of the presidency of Donald Trump. Trenchant and insightful, America’s Response to China is critically important for understanding U.S.–China relations in the twenty-first century.

Cohen . . . [is] the leading historian of Sino-American relations of his generation. This book has much to offer both newcomers to its subject as well as those who have been studying relations between these two countries nearly as long as its author. American Diplomacy

A fresh new look at the history of United States diplomacy toward China . . . The subject will never be the same again. John King Fairbank, American Political Science Review

Lucid and concise . . . a model of its kind, thoughtful, even-tempered, and extremely well-written. Pacific Historical Review

Preface to the Sixth Edition
Acknowledgments to the Sixth Edition
Romanization Table
Prologue: The Barbarians and the Tribute System
1. The Development of the Treaty System
2. The United States as a Power in East Asia
3. In the Light of the Rising Sun
4. The Response to Chinese Nationalism
5. China as an Abstraction—the Conflict with Japan
6. Communism in China
7. The Great Aberration
8. Rapprochement—at Last
9. In the Shadow of Tiananmen
10. America in the Age of Chinese Power
Concluding Thoughts
Notes
Bibliographical Essay
Index

Warren I. Cohen is Distinguished University Professor Emeritus at the University of Maryland, Baltimore County, and senior scholar at the Woodrow Wilson International Center for Scholars. His Columbia University Press books include A Nation Like All Others: A Brief History of American Foreign Relations (2018) and East Asia at the Center: Four Thousand Years of Engagement with the World (2000).