An Empire of Touch

Women's Political Labor and the Fabrication of East Bengal 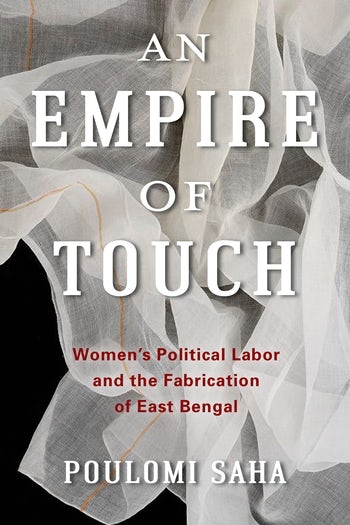 An Empire of Touch

Women's Political Labor and the Fabrication of East Bengal

In today’s world of unequal globalization, Bangladesh has drawn international attention for the spate of factory disasters that have taken the lives of numerous garment workers, mostly young women. The contemporary garment industry—and the labor organizing pushing back—draws on a long history of gendered labor division and exploitation in East Bengal, the historical antecedent of Bangladesh. Yet despite the centrality of women’s labor to anticolonial protest and postcolonial state-building, historiography has struggled with what appears to be its absence from the archive.

Poulomi Saha offers an innovative account of women’s political labor in East Bengal over more than a century, one that suggests new ways to think about textiles and the gendered labors of their making. An Empire of Touch argues that women have articulated—in writing, in political action, in stitching—their own desires in their own terms. They produce narratives beyond women’s empowerment and independence as global and national projects; they refuse critical pronouncements of their own subjugation. Saha follows the historical traces of how women have claimed their own labor, contending that their political commitments are captured in the material objects of their manufacture. Her analysis of the production of historical memory through and by the bodies of women spans British colonialism and American empire, anticolonial nationalism to neoliberal globalization, depicting East Bengal between development economics and postcolonial studies. Through a material account of text and textile, An Empire of Touch crafts a new narrative of gendered political labor under empire.

A brilliant provocation in the debate about female political subjectivity in the Global South, An Empire of Touch is an important and timely book. Going beyond the typical focus on women’s empowerment and independence, it demonstrates how women in East Bengal through their symbolic and material labor produce the terms of their own political self-conception. Saha’s deft and sophisticated readings of the material particulars of women’s labor reveal a relational politics of the self that expands what and who count as political. Mrinalini Sinha, author of Specters of Mother India: The Global Restructuring of an Empire

Saha has given us a thought-provoking, incisive, elegant, and necessary work wherein she recasts and regenerates postcolonial criticism. This book is well written, beautifully researched, creative, and politically vital. Erin Manning, author of Politics of Touch: Sense, Movement, Sovereignty

Saha proposes that the diaphanous nature first of muslin and then of other fabrics constitutes neither a simple product with exchange value nor an ephemeral or affective form of labor we have come to associate with certain kinds of women’s work. Forms of touch are woven into the fabric of colonial and postcolonial exchange. And they carry a spectral quality. Rather like the visor effect in Derrida’s reading of Hamlet in Specters of Marx, fabric casts a shadow on abstracted beings moving through history teleologically, and weaves a different affect. Ranjana Khanna, author of Algeria Cuts: Women and Representation, 1830 to the Present

Poulomi Saha is assistant professor of English at the University of California, Berkeley.