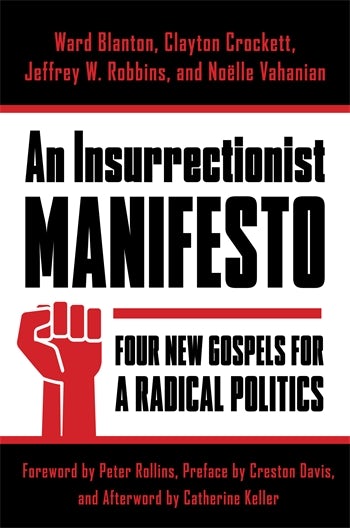 An Insurrectionist Manifesto contains four insurrectionary gospels based on Martin Heidegger's philosophical model of the fourfold: earth and sky, gods and mortals. Challenging religious dogma and dominant philosophical theories, they offer a cooperative, world-affirming political theology that promotes new life through not resurrection but insurrection. The insurrection in these gospels unfolds as a series of miraculous yet worldly practices of vital affirmation. Since these routines do not rely on fantasies of escape, they engender intimate transformations of the self along the very coordinates from which they emerge. Enacting a comparative and contagious postsecular sensibility, these gospels draw on the work of Slavoj iek, Giorgio Agamben, Catherine Malabou, François Laruelle, Peter Sloterdijk, and Gilles Deleuze yet rejuvenate scholarship in continental philosophy, critical race theory, the new materialisms, speculative realism, and nonphilosophy. They think beyond the sovereign force of the one to initiate a radical politics "after" God.

Each gospel-like contribution to The Insurrectionist Manifesto can be read separately, but when they are read in tandem, a particular disturbing power is occasioned. I found myself stimulated and conceptually shaken in equal fashion. The call of these gospels has the potential to disturb the ground of our being. Those who hear it will be positively afflicted by a series of challenges that are exciting and demanding in equal measure. Mike Grimshaw, University of Canterbury

Attempts to break the age-old grip of the transcendent on theological thought have multiplied in recent years. In this indispensable provocation to thought, these wonderfully intrepid and scholarly philosophers of religion have pushed the accompanying turn toward immanence in the direction of the political in all its hugely varied insurrectionist forms. Kenneth Surin, Duke University

In these unapologetic, interlocking essays, we find a radical theology that finally lives up to its name. Here theology tumbles kenotically, inexorably, into political economy, literature, climate science, postcoloniality, critical race theory, and nonequilibrium thermodynamics, forcing us to face the earth, sky, mortals, and gods as they are—and in all that they're not—and only then as they might yet be. Mary-Jane Rubenstein, author of Worlds Without End: The Many Lives of the Multiverse

New concepts are very rare, but when philosophers manage to create them, everything changes. This manifesto thrust us into an 'insurrectionist' theology where Nietzsche's death of God, Zizek's ontology of the Real, and Malabou's plastic materiality come together to overcome those metaphysical frames that still condition our lives. Anyone interested in radical theology, philosophy, and politics in the 21st century must read this book carefully since he might find himself also to be an insurrectionist. Santiago Zabala, ICREA Research Professor of Philosophy at Pompeu Fabra University

Foreword, by Peter Rollins
Preface, by Creston Davis
Introduction: What Is Insurrectionist Theology?, by Ward Blanton, Clayton Crockett, Jeffrey W. Robbins, and Noëlle Vahanian
1. Earth: What Can a Planet Do?, by Clayton Crockett
2. Satellite Skies; or, The Gospel and Acts of the Vampirisms of Transcendence, by Ward Blanton
3. A Theory of Insurrection: Beyond the Way of the Mortals, by Jeffrey W. Robbins
4. The Gospel of the Word Made Flesh: Insurrection from Within the Heart of Divinity, by Noëlle Vahanian
Afterword, by Catherine Keller
Notes
Index

Ward Blanton is a reader in biblical cultures and European thought at the University of Kent.

Clayton Crockett is professor and director of religious studies at the University of Central Arkansas.

Jeffrey W. Robbins is professor and chair of religion and philosophy at Lebanon Valley College.

Noelle Vahanian is professor of philosophy at Lebanon Valley College.