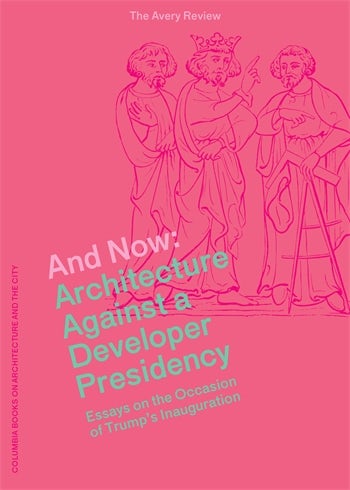 The election and inauguration of Donald J. Trump as the president of the United States of America have provoked an unprecedented intensity of reflection in virtually all academic disciplines. The professions of architecture and planning, faced with the phenomenon of a self-proclaimed "builder-in-chief," have found themselves facing a series of fundamental questions, both old and new. How should we think, teach, and practice under a developer presidency? What sort of walls will we and won't we choose to build? What are our commitments of critical thought, and what obligations should we turn our energies toward?

The essays gathered in And Now explore the nature of architecture's many long-standing complicities. Architecture coordinates colossal expenditures (of material, of energy); it scripts forms of labor (in its construction, in its operation, and in the programs it houses); and it is both a repository and generator of capital. Architecture participates, centrally, in defining modes of life, whether for the privileged or the dispossessed—designing and building the boundaries between the "haves" and the "have-nots." This fundamental reality of architectural practice need not inspire either nihilism or defensiveness but should rather be understood, quite simply, as the terrain we navigate. Naming these complicities and the injustices they perpetuate is a first step toward addressing them.

The Avery Review is a monthly journal of critical essays on architecture published by the Office of Publications at Columbia University's Graduate School of Architecture, Planning and Preservation, and can be found at averyreview.com.