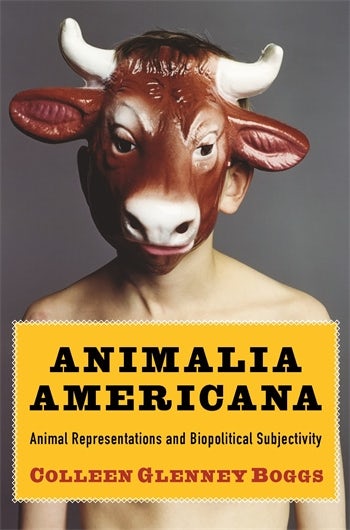 Colleen Glenney Boggs puts animal representation at the center of the making of the liberal American subject. Concentrating on the formative and disruptive presence of animals in the writings of Frederick Douglass, Edgar Allan Poe, and Emily Dickinson, Boggs argues that animals are critical to the ways in which Americans enact their humanity and regulate subjects in the biopolitical state. Biopower, or a politics that extends its reach to life, thrives on the strategic ambivalence between who is considered human and what is judged as animal. It generates a space of indeterminacy in which animal representations intervene to define and challenge the parameters of subjectivity. The renegotiation of the species line produces a tension that is never fully regulated. Therefore, as both figures of radical alterity and the embodiment of biopolitics, animals are simultaneously exceptional and exemplary to the biopolitical state. An original contribution to animal studies, American studies, critical race theory, and posthumanist inquiry, Boggs thrillingly reinterprets a long and highly contentious human-animal history.

This is a book about Fido and Derrida, about Sparky and Levinas, about animals and major twentieth-century (and now twenty-first century) theorists of subjectivity such as Lacan, Agamben, and Foucault. Such unexpectedness and daring supplies a refreshing tonic not only for American literary criticism but also for other intellectual endeavors such as philosophy, ethics, and psychoanalysis indebted to species logic. Boggs shows how productive the interdisciplinary work of animal studies is, and it is a task she accomplishes with grace and perspicacity. Russ Castronovo, University of Wisconsin–Madison

Colleen Glenney Boggs brings animal studies into dialogue with American literary studies to chronicle the emergence of 'the human' in relation to 'the animal.' She reads the question of species in relation to race and gender and shows how the shifting relations of these terms underlie the most basic questions of social justice; she shows, that is, why animal studies is such a significant field in the current moment. In its bringing together and working through the nature of biopolitics, the role of affect in cultural studies, the relationship of the animal to the human, and the importance of literature to the fashioning of a more just and equitable society, Animalia Americana models new directions not only for animal studies but for the humanities more broadly. Priscilla Wald, Duke University

From dogs in the White House and Abu Ghraib to Plymouth Plantation and some of the key texts in the canon of American literature, Colleen Glenney Boggs explores 'the animal' as a representational nexus where the biopolitics of subjectivity and community are ceaselessly negotiated. An important contribution to both Americanist literary history and the burgeoning exchange between animal studies and biopolitical thought, Animalia Americana explores the space where affect and embodiment cut across species lines, reconfiguring relations not just of species but also of race, gender, and nation. Cary Wolfe, Rice University

The welcome spirit (pun intended) of an irreverent polemic runs through this provocative and important argument this study exemplifies scholarship that takes as its starting point a critical stance toward the delimiting categories and assumptions of rational humanism. American Literary History Online

A very ambitious and smart book [Boggs's] scholarship will appeal quite forcefully to scholars of American literature and contemporary theory (her endnotes in themselves make for a terrific read). Poe Studies

Colleen Glenney Boggs is associate professor of English and women's and gender studies at Dartmouth College and the author of Transnationalism and American Literature: Literary Translation, 1773–1892.