Animals and the Human Imagination

A Companion to Animal Studies 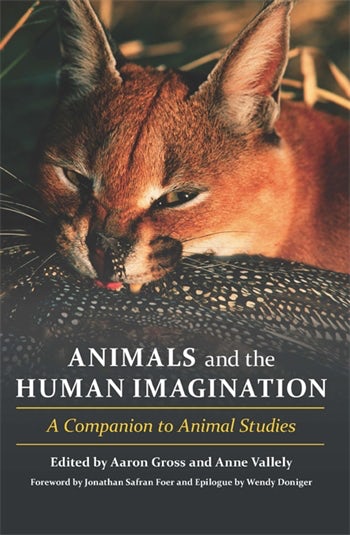 Animals and the Human Imagination

A Companion to Animal Studies

Human beings have long imagined their subjectivity, ethics, and ancestry with and through animals, yet not until the mid-twentieth century did contemporary thought reflect critically on animals' significance in human self-conception. Thinkers such as French philosopher Jacques Derrida, South African novelist J. M. Coetzee, and American theorist Donna Haraway have initiated rigorous inquiries into the question of the animal, now blossoming in a number of directions. It is no longer strange to say that if animals did not exist, we would have to invent them.

This interdisciplinary and cross-cultural collection reflects the growth of animal studies as an independent field and the rise of "animality" as a critical lens through which to analyze society and culture, on a par with race and gender. Essays consider the role of animals in the human imagination and the imagination of the human; the worldviews of indigenous peoples; animal-human mythology in early modern China; and political uses of the animal in postcolonial India. They engage with the theoretical underpinnings of the animal protection movement, representations of animals in children's literature, depictions of animals in contemporary art, and the philosophical positioning of the animal from Aristotle to Derrida. The strength of this companion lies in its timeliness and contextual diversity, which makes it essential reading for students and researchers while further developing the parameters of the discipline.

The contributors succeed in making a range of complex issues in contemporary animal studies accessible—and even engrossing—to the ordinary educated reader, and the editors provide a richly intelligent mapping of the field. J. M. Coetzee, winner of the Nobel Prize in Literature

Impressive and startling, this anthology shows the radical potential of edited volumes to break ground beyond the scope of monographs. Fascinating new studies in fields as diverse as philosophy, ethics, media studies, wildlife management, and children's literature challenge the 'animal/human binary' of Western thought. This borderline reveals itself to be neither ontologically fixed nor biologically stable. Rather, it is wondrously fluid and contingent, existing both within and without human beings. As Claude Lévi-Strauss famously observed in culture and Paul Shepard has memorably mapped in cognition, we continue to 'think' with animals—to imagine ourselves in relation to them, or, as Aaron Gross puts it, 'to self-conceptualize through animals in particular contexts.' The rich array of ideas offered here seems to suggest we can do nothing other than that. Yet at the same time we are moved 'to pause, put to rest, or surrender the categories animal and human.' It is to the editors' infinite credit that this paradox is left unmolested, thus emerging as an oracle. Kimberely Patton, Harvard University, coeditor of A Communion of Subjects: Animals in Religion, Science, and Ethics

Evocative and provocative, these essays deeply unsettle the Western tradition's assumption of an abyss between human and non-human animals. Probing contemporary biopolitics in relation to animals, they announce the necessity of nothing less than a mutation in thought. Here, the ethics of difference, vulnerability, and responsibility come face to face with the uncanny proximity and radical distance of animals. As this anthology shows, animals regard us, and we can't evade that call. Elisabeth Weber, University of California, Santa Barbara

The editors do not simply take stock of the current state of animal studies. Instead, they have gathered together a number of interesting and original researchers who are themselves making novel contributions to the field. This anthology is an important book, both as an introductory text and as a volume that advanced researchers will turn to in hopes of finding inspiration and new ideas in animal studies. Matthew Calarco, Associate Professor of Philosophy, CSU Fullerton

Animals and the Human Imagination soars. Intellectually exciting, smart, and accessible, this volume will intrigue and revolt, surprise and inspire. The opening overview by Gross is a tour de force and each essay fascinates. Collectively they offer an invitation to think in new ways about what we, perhaps wrongly, call our humanity. I can't imagine a better introduction to the essential new field of critical animal studies. Jonathan Safran Foer

What the remarkable and academically diverse collection of essays in Animals and the Human Imagination achieves is to point out how we have made animals vanish in our language and how we might bring them back into our collective vision again..... This book will inspire more scholarly work on animals, but it will also supply fuel for activists who hope to treat animals more humanely—not to say humanly—in the world outside the academy. Wendy Doniger, Mircea Eliade Professor of the History of Religions at the University of Chicago, and author of Women, Androgynes, and Other Mythical Beasts (University of Chicago Press, 1980)

Foreword, by Jonathan Safran Foer
Introduction and Overview: Animal Others and Animal Studies, by Aaron Gross
Part 1. Other Animals: Animals Across Cultures
1. Hunting and Gathering as Ways of Perceiving the Environment, by Tim Ingold
2. On Yeti and Being Just: Carving the Borders of Humanity in Early Modern China, by Carla Nappi
3. Pastoral Power in the Postcolony: On the Biopolitics of the Criminal Animal in South India, by Anand Pandian
Part 2. Animal Matters: Human/Animal and the Contemporary West
4. Discipline and Distancing: Confined Pigs in the Factory Farm Gulag, by Joel Novak
5. Boys Gone Wild: The Animal and the Abject, by Cynthia Chris
6. Animal Heroes and Transforming Substance: Canine Characters in Contemporary Children's Literature, by Michelle Superle
7. The Making of a Wilderness Icon: Green Fire, Charismatic Species, and the Changing Status of Wolves in the United States, by Gavin van Horn
8. Thinking with Surfaces: Animals and Contemporary Art, by Ron Broglio
Part 3. Animal Others: Theorizing Animal/Human
9. Being with Animals: Reconsidering Heidegger's Animal Ontology, by Brett Buchanan
10. Heidegger and the Dog Whisperer: Imagining Interspecies Kindness, by Ashley E. Pryor
11. The Lives of Animals: Wittgenstein, Coetzee, and the Extent of the Sympathetic Imagination, by Undine Sellbach
12. Animal, All Too Animal: Blood Music and an Ethic of Vulnerability, by Myra J. Hird
Epilogue: Making Animals Vanish, by Wendy Doniger

Aaron S. Gross is a professor of theology and religious studies at the University of San Diego and holds a MTS from Harvard Divinity School and a Ph.D. from the University of California, Santa Barbara. He co-chairs the American Academy of Religion's Animals and Religion Group and has played a leading role in a wide variety of national and international animal-welfare campaigns since the mid-1990s. He founded the nonprofit group Farm Forward in 2007.

Anne Vallely is a professor of religious studies at the University of Ottawa. She earned her Ph.D. from the University of Toronto, and her research focuses on the anthropology of South Asian religiosity, especially that of Jainism, and on the symbolic construction of human/non-human boundaries across cultures. She is the author of Guardians of the Transcendent: An Ethnography of a Jain Acetic Community.

Jonathan Safran Foer is the author of Eating Animals, Extremely Loud and Incredibly Close, and Everything is Illuminated, all international bestsellers.

Wendy Doniger is Mircea Eliade Distinguished Service Professor of the History of Religions at the University of Chicago and a member of the Committee on Social Thought. Her books include The Implied Spider: Politics and Theology in Myth; Dreams, Illusions, and Other Realities; Other Peoples' Myths; The Cave of Echoes; and the English-language edition of Yves Bonnefoy's Mythologies.